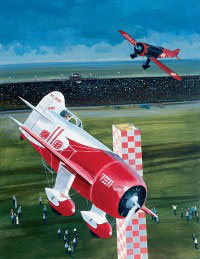 The Gee Bee Super Sportster R-1 classic airplane was designed by the Granville Brothers (Zantford, Robert, Mark, and Edward), who became some of the most famous names in aviation during the Golden Age of Flight.

They backed up their native skills and vision with the engineering expertise of two men, the great test pilot, Bob Hall, and the courtly gentleman engineer, Howell "Pete" Miller.

Their first big success came with the beautiful Model Z, powered by a 535-horsepower Pratt & Whitney Wasp Jr. engine. Lowell Bayles flew it to victory in the 1931 Thompson Trophy Race at 236.239 miles per hour. Sadly, Bayles would be killed in the Model Z on December 5, 1931, in an attempt on the world's speed record.

Undaunted, the Granville Brothers pressed on with a new concept using a teardrop-shaped fuselage; short, broad wings; and exquisite craftsmanship. Miller supervised the wind-tunnel testing that revealed that Zantford Granville's intuitive design was going to be very fast.

Two Gee Bees, the R-1 and R-2, were built for the 1932 air-racing season. Jimmy Doolittle flew the R-1 to a new world's land plane speed record of 296 mph, then won the Thompson at 252.7 mph. It was the high point of Gee Bee history, for only tragedy would follow for the rest of the decade as one Gee Bee crash followed another.

Gee Bees came to be regarded as totally treacherous aircraft, certain to kill whoever flew them. It was an unfair judgment, for the crashes were most often the result of inadequately prepared pilots attempting to fly a very sophisticated aircraft.

In recent years, Delmar Benjamin, flying the exact replica he built of the R-2, has shown that the Gee Bee is a capable aerobatic aircraft in the hands of a pilot who understands its characteristics. Delmar has completely vindicated the basic Gee Bee design and rendered a great service to aviation history. The Granville Brothers' vision and instincts have been proved valid.