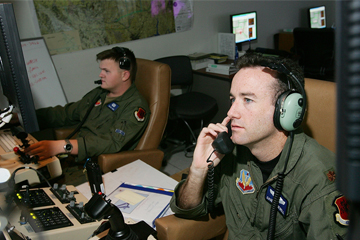 Drone pilots might not officially train on video games, but gaming experience can be helpful.
Ethan Miller/Getty Images

Before we get into the question at hand, we'd better acknowledge the wishes of our military defense officials and say that the word "drone" is not their favorite term for their amazing flying machines. They prefer remotely piloted aircraft (RPA) or unmanned aerial vehicle (UAV). If you're puzzled at their sensitivity to semantics, you might want to remember that the word "drone" connotes an entirely automated experience, when in fact the pilots — and sensor operators and intelligence analysts — play an integral part in making the drone a functional piece of machinery [source: Hurwitz]. Piloting a drone goes beyond using a joystick and pressing the red button, in other words — even if that's precisely the setup.

Which leads us to the topic: How different is flying a drone from playing a video game? And is RPA pilot training that different from a 15-year-old boy's average Friday night? The first question is — predictably — a mess of conflicting opinions. For good reason, some drone pilots might take umbrage to comparisons of their job — which can involve actually killing human beings — to a video game [source: Blackhurst]. On the other hand, a study conducted by the Massachusetts Institute of Technology showed that video game players were uniquely suited to drone operation due to their increased attention to multiple details at a time [source: Canadian Press].

As for training, don't expect drone pilots to have a bullet point on their resume that reads, "I sat in my mother's basement and logged 170 hours beating 'Aerial Force Strike.'" In fact, a lot of pilots have been recruited out of actual military flying programs, where they were logging time piloting real manned aircraft [source: Hurwitz]. There doesn't seem to be much evidence that the military is actively providing video games for training, but anecdotal stories abound about drone pilots who seemingly perform better because of their gaming experience [source: Democracy Now].

One piece that does get mentioned quite a bit? Video games — while providing a fairly decent simulation or at least being capable of fine-tuning hand-eye coordination — aren't going to give the drone pilots one real-life experience that's pretty intrinsic to their daily routine: boredom. While you may think of piloting an unmanned aerial vehicle as one heart-racing moment after the other, a lot of the job is simply sitting around, watching a target. If someone asks you to collect intelligence on a certain spot or person, you might spend weeks simply flying in circles, recording the mundane life that is unfurling — or totally absent — in the little spot you're watching [source: Hurwitz].

It's actually quite different from a video game, where nonstop action leads players to keep pushing for their adrenaline rush. However, a video game player might be better suited to it than — say — an Air Force or Marine pilot who has been trained for action and now is forced to sit in a chair all day and scour the same countryside for hours at a time [source: Breeden]. So while drone pilots might not be officially training on video games, we have reason to believe that experience with gaming could be a helpful step toward drone careers.

10 Unsolved Airplane Mysteries
The World Just Had Its First Mind-Controlled Drone Race
A First for Airports: Flapping Robo-falcon to Scare Away Birds