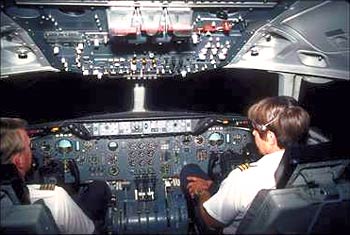 On an airliner, the captain is the pilot in the left seat. He or she flies the airplane, makes all the command decisions and is responsible for the flight's safety. The captain's job is a big responsibility. It calls for tough decisions and requires more than just the technical skill involved in flying the airplane. The captain is a team leader and must establish an effective crew atmosphere, with good communication and resource management. A captain must pass many written and practical tests and have his or her performance evaluated regularly. A pilot must have high seniority (time in service) to hold the position of captain and, as a general rule, captains are the most senior (and therefore most experienced) of the pilots at an airline. As we will see in the next section, seniority plays a major role in the career of an airline pilot.

The cornerstone of aviation safety is redundancy. So, in addition to two (or more) engines, radios, sets of flight instruments, etc., there are always at least two flying pilots. The first officer sits in the right seat and acts as a co-pilot. He or she has an independent set of controls and instruments to operate the aircraft and flies the plane about half the time, usually swapping duties with the captain each flight leg. The first officer assists the captain in preflight duties by reviewing paperwork and performing aircraft preflight checks. The first officer must pass many practical and written exams and must have a certain amount of seniority. As a rule, first officers have less seniority than their captains.

Some planes have a third position in the cockpit for a flight engineer, also called a second officer. The flight engineer is a usually a pilot but doesn't actually fly the airplane. He or she performs the bulk of aircraft preflight checks, operates and monitors the aircraft's systems during flight and makes aircraft performance calculations, such as determining takeoff and landing speeds, engine power settings and fuel management. The flight engineer position is also an apprenticeship of sorts, as it is the best position for observing the flying pilots. This job is now a rarity in the business: The positions are mostly in airplanes built before the mid-1980s. As older airplanes are retired, they are replaced with planes in which more advanced or automated systems perform the flight engineer's duties. The position will someday be "extinct," like the navigator and radio operator positions of airplanes from the 1930s and 1940s.