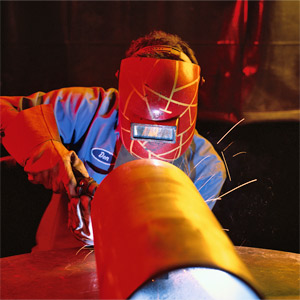 The men and women behind these welding masks build much of what you see: skyscrapers, cars, even cruise ships.
Steve Weinrebe/­Getty Images

­Skyscrapers, exotic cars, rocket launches -- certain things simply demand your attentio­n. Welding, in all likelihood, isn't one of them. You may have gone your whole life without ever having thought about the subject. It might surprise you then, that welding affects an estimated 50 percent of the United States gross national product  [source: Hobart]. Without it, none of those amazing skyscrapers, cars or rockets would exist.

Welding is, at its core, simply a way of bonding two pieces of metal. While there are other ways to join metal (riveting, brazing and soldering, for instance), welding has become the method of choice for its strength, efficiency and versatility.

­There are tons of different welding methods, and more are being invented all the time. Some methods use heat  to essentially melt two pieces of metal together, often adding a "filler metal" into the joint to act as a binding agent. Other methods rely on pressure to bind metal together, and still others use a combination of both heat and pressure. Unlike soldering and brazing, where the metal pieces being joined remain unaltered, the process of welding always changes the work pieces.

This may seem like a trivial point, but it's actually critical to understanding why welding produces such strong bonds. In the processes of soldering and brazing, two pieces of metal are joined by introducing a third material (with a lower melting point) into the mix. Melting this third material between the surfaces of the original pieces binds the pieces together. The bond, however, is only as strong as the joining material. Welding, on the other hand, cuts out the middleman and joins the original pieces directly to each other. The result is a strong, cohesive bond that's often as strong as the material itself.

­In this article, we'll take a closer look at exactly how welding works. We'll also examine some of the numerous applications for welding, along with the expertise and equipment necessary to make it all happen. But before we do, let's look at where it all began.