The History of Welding 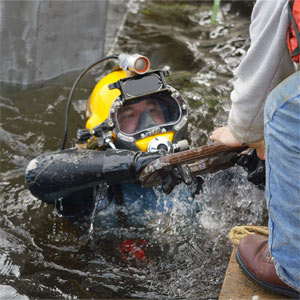 An underwater welder hands off his welding torch after securing the underwater piers that will carry the I-195 roadway in Providence, R.I., in 2005.
­AP Photo/Stew Milne

With all the power and precision machinery involved in production welding, you might think of welding as a relatively new process. In reality, welding has been around for thousands of years. Early examples of welding have been found in locations ranging from Ireland to India, with some dating back to the Bronze Age. Naturally, these civilizations lacked the vast array of tools and machinery that welders have access to now. How did they manage to weld?

The process they used is known as forge welding. To start the process, blacksmiths would heat the metal until it was bright red in color (but still not at its melting point). The blacksmiths would then place the two pieces, slightly overlapping, on an anvil and pound them together. Forge welding has multiple limitations. Only relatively s­oft metals can be forge welded, and the process is very labor intensive. In places without electricity, however, the process is still used.

Forge welding was the only game in town until the 19th century. With the onset of the industrial revolution, however, numerous discoveries pushed welding forward fast. Research on electricity yielded electrodes and electric arcs. Rudimentary torches were developed by mid-century as well. Both discoveries would play heavily into the welding methods of the next century.

­By the late 1800s, many of the pieces were in place to make welding a driving force in manufacturing. Still, the methods of this era weren't perfect. Oxidation (the process of metals bonding to the oxygen particles in the atmosphere) occurred during the welding process and made welds porous and brittle. Such welds posed a grave risk to workers. During the period from 1895 to 1905, for instance, poorly made boilers exploded daily, causing thousands of deaths in the process [source: Sapp]. Clearly there was an urgent need for better welding methods. Over the next few sections, we'll learn more about those new and improved methods, starting with a closer look at the tools of the trade.

Welding at Sea and in Space

Diver welders routinely repair ships and oil rigs, typically using arc welding (negating the use of a flame). Space welding sits at the other end of the spectrum. The vacuum of space creates an ideal environme­nt for welding, since there are no gases to interact with the welding site. Space welding makes massive undertakings like the International Space Station possible.