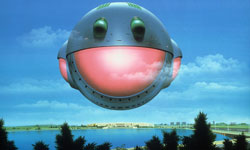 If you're looking for another random assortment of galactic hotrods, you've come to the wrong top 10 list.

Don't get me wrong, I love cool spaceships just as much as the next guy. Who doesn't? The inner geek longs to climb into the cockpit of an X-wing starfighter, open up the Swordfish II on the galactic tarmac and slingshot a Klingon Bird-of-Prey around the sun.

But this article is going to answer to a higher calling. It's not enough that a ship is merely redonkulous. Free from the restraints of engineering or even basic physics, most fictional spacecraft manage redonkulousity just fine.

Nope, this list is concerned with which fictional spacecraft would actually benefit humanity in a meaningful way, which out-of-this-world rides would awaken a true space-faring civilization and save us from ourselves.

Let's fire up the engines, shall we? Engage.