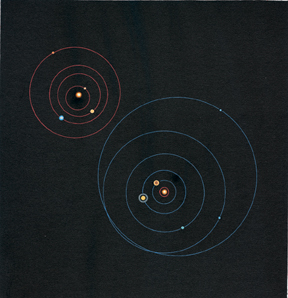 The smallest and most-distant planet in our solar system is tiny, icy Pluto. It is even smaller than our moon, and it wasn't discovered until 1930 — the only planet discovered in the twentieth century. Pluto is about one-fifth the diameter of Earth, and it is named after the Roman god of the underworld, who could make himself invisible.

Unlike the other outer planets, Pluto is terrestrial. Its atmosphere is mostly nitrogen, and, unexpectedly, it seems to be expanding. Whatever heat reaches Pluto is not enough to warm the surface of the planet. The planet's atmospheric temperature varies between around -235° and -170° Celsius, depending on the altitude above the surface.

Pluto is so far from the sun, it takes 247.7 Earth years to orbit the sun. Its icy moon, Charon, is so large (relatively) and close, it revolves around Pluto in about six days and nine hours, meaning that it has the second slowest rotation speed in the solar system (after Venus, which takes 243 days to turn on its axis). Pluto and Charon were probably Kuiper Belt objects (the Kuiper Belt is an area beyond Neptune's orbit).

Pluto is a very dark, cold place, and it's been getting even darker since 1954. The sun that provides Earth with light and heat is just another light in the sky to Pluto because it is so far away. Although Pluto is said to be the most-distant planet in the solar system, its orbit is so elliptical that for about 20 years of its 248-year orbit, the tiny planet is a little closer to the sun than Neptune. For most of the time, though, Pluto really is the most-distant planet in the solar system.

Pluto is the only planet in our solar system that has not yet been visited by a spacecraft. This may change, though, when NASA's New Horizon spacecraft arrives at Pluto.
Image courtesy of NASA

How Pluto Differs from Other Planets

Even the Hubble Space Telescope can only get a very faint picture of Pluto and Charon. Charon is more than half as large as Pluto itself, making it closer in size to its parent planet than any other moon in the solar system. You could almost think of Pluto and Charon as a very tiny double planet system. They are the only bodies in our solar system where both are locked in rotation. That means Charon keeps its same face toward Pluto, and Pluto keeps its same face toward Charon.

There are some who argue that Pluto's not a planet at all, but an escaped moon of Jupiter, or that it is actually an asteroid that drifted into a remote orbit around the sun. Pluto is the only planet in our solar system that has not yet been visited by a spacecraft. This may change though when NASA's New Horizon spacecraft arrives there, which may be as early as summer 2015.

Just the facts on Pluto