by Jonathan Atteberry
Prev NEXT
3

The Republic of Mauritius 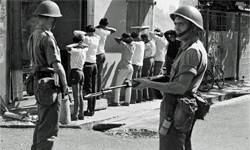 Things have changed greatly since January 1968, when British soldiers patrolled the streets of Mauritius.
Monks/Express/Getty Images

Located east of Madagascar, the island nation of Mauritius is home to more than a million people and one of the strongest economies in Africa. What you won't find, however, are regular military forces. In fact, since gaining independence from Great Britain in 1968, Mauritius has never felt the need to develop a national defense. Perhaps the island had its fill of war when the French and British fought over it in the early 19th century or, later on, when it served as a naval base and airfield for Great Britain throughout World War II. Today, Mauritius spends only 0.3 percent of its gross domestic product on defense, which comprises a police force, Special Mobile Force (SMF) and National Coast Guard. All told, 10,115 personnel work for these agencies [source: U.S. Department of State].

These organizations are charged with handling everything from riot control to search-and-rescue missions, though they aren't equipped to handle national defense. Illustrating Mauritius' close ties with other nations, the country receives counterterrorism training from the United States, and its coast guard works closely with the Indian Navy, proving that if your country doesn't have a military, it's good to have allies that do.

For the next country on our list, the military wound up causing more trouble than it prevented. Read on to see what we mean.