The Shadowy History of Anesthesia 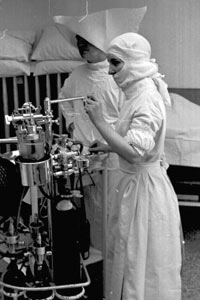 A nurse regulates the flow of anesthetic during an operation at a London hospital, October 1938.
Felix Man/Picture Post/Getty Images

Although it hasn't always been called anesthesia, the concept has been around for as long as people have been performing surgery -- no matter how primitive or crude. Early anesthetics were soporifics (which dull the senses and induce sleep) or narcotics. These included opium, mandrake, jimsonweed, marijuana, alcohol and belladonna. Native American societies such as the Incas chewed coca leaves (from which cocaine is derived). While all of these substances can provide some level of pain relief, sedation or amnesia, there were no guarantees. There is also a history of using nonmedical methods such as hypnosis, ice (to numb the area) and acupuncture.

By the mid-1840s, the only two anesthetic agents regularly used in industrialized countries were opium and alcohol. Both had many negative side effects, such as addiction, and neither could typically dull the pain completely by themselves. Doses large enough to provide the desired effect could just as easily result in death. Sometimes, patients were knocked unconscious by a blow to the head. But without good anesthesia, surgery usually resulted in the tortured screams of patients.

Everything changed in 1846. A dentist named Dr. William Morton put on a demonstration at Massachusetts General Hospital when he removed a tumor from the jaw of a patient. Prior to the operation, he used a sponge soaked with ether to render his patient unconscious. Afterward, the patient claimed that he had no memory of the operation or any pain. The doctors witnessing this were highly skeptical, but Morton was soon hailed as the conqueror of pain.

The problem was that Morton wasn't the first to claim the discovery of modern surgical pain relief. A few years after medical journals published articles about Morton, Dr. Crawford Long stated that he had first used ether in operations in 1841 after observing its effects upon recreational users. In addition, Dr. Charles Jackson claimed that his work had influenced Morton. He went to Congress in attempt to gain recognition with the support of Oliver Wendell Holmes (credited with suggesting the use of the word "anesthesia").

The American Medical Association as well as the American Dental Association endorsed Dr. Horace Wells, a dentist, as the first person to use nitrous oxide to pull teeth in 1845. Chloroform was first used as an anesthetic by Dr. James Simpson in the mid-1840s as well. Because it's highly toxic, chloroform ceased to be used in favor of ether in the early 1900s.

Now, there's a wide variety of anesthetics available, but we still use derivatives of some of these early substances, such as morphine, the "-aine" drugs chemically related to cocaine, and nitrous oxide. Anesthesia continues to evolve and become safer, enabling doctors to perform necessary and life-saving operations. The next time you need anesthesia, you'll have a better understanding of the process.

For lots more information on anesthesia and related topics, check out the links below.