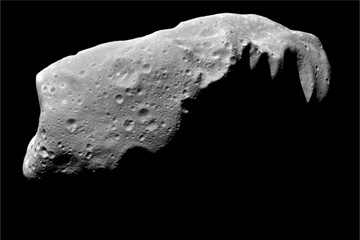 There's Ida. She's roughly 32 miles (52 kilometers) across. An asteroid like her would spell big trouble for our planet if she ever got the notion to visit. See more space dust pictures.
Image courtesy NASA/Jet Propulsion Laboratory

You've seen it plenty of times on the big screen: Scientists spot an enormous asteroid hurtling toward Earth and the only hope for mankind is to send a team to plant a nuclear bomb inside the looming monster. Despite several suspenseful setbacks, the intrepid team is ultimately successful, and the asteroid explodes into millions of pieces. Earth is saved yet again from certain doom. Yahoo. Movies like "Deep Impact" and "Armageddon" make it seem so easy. Surely nuclear weapons that can obliterate entire cities contain enough destructive power to blow a giant space rock to bits, right?

The answer is yes and no. To start with, asteroids come in all shapes and sizes. Ceres, the largest known asteroid, stretches 580 miles (933 kilometers) in diameter, while one of the smallest on record, 1991 BA, measures 20 feet (6 meters) across. An asteroid larger than 6.2 miles (10 kilometers) in diameter is considered "extinction class," or powerful enough to destroy life on Earth if it collides with our hapless planet [source: NASA].

Technically, a nuclear bomb could obliterate a smaller asteroid, but it's not these smaller entities that pose a threat to Earth's safety. The asteroids that would be really worrisome -- those larger than 1,312 feet (400 meters) -- wouldn't be easily wiped out by such a bomb. Sure, great hunks of one might break off, but not enough to neutralize the danger. A 2007 NASA report indicated that planting a nuclear bomb on or under the surface of an asteroid would most likely cause it to fracture into several pieces -- and large pieces of an even larger asteroid can still be pretty dangerous if they're hurtling toward the Earth [source: NASA].

So while yes, a nuclear bomb could be used to blow up a small asteroid, it's unlikely that world leaders would waste expensive resources on that endeavor. As for large, Earth-threatening asteroids, a nuke likely wouldn't succeed at blowing it up completely.

Keep reading to learn whether NASA thinks the whole explosive business is a good idea.

So a nuclear bomb would be essentially useless at disintegrating an asteroid several miles wide, but scientists at NASA think that a nuclear weapon could be used in a different way to defend the planet.

In 2005, U.S. Congress asked NASA to develop plans for preventing an asteroid-Earth collision. In 2007, the space agency presented its ideas at the Planetary Defense Conference in Washington, D.C. (which sounds like something out of a sci-fi flick). In its report, NASA outlined several options, a few of which involved using nuclear explosives to deflect the asteroid away from Earth. The force from the explosions would (hopefully) provide enough momentum to nudge the asteroid in a different direction, preventing disaster.

The best option in the non-nuclear category is a kinetic impact (a nice way of saying they would ram objects into the asteroid), but doing so would require detailed knowledge of what the surface of the asteroid is like. Some other non-nuclear options that NASA considered include using a laser or a giant mirror to focus energy on a spot on the asteroid and "boil off" parts of it, or using a spacecraft to tug the asteroid in a different direction.

So, will we ever know in our lifetime if it's possible to deflect an asteroid? Maybe. In December 2009, the director of the Russian Federal Space Agency, Anatoly Perminov, announced that Russia was considering making plans to deflect the 270-meter (885-foot) asteroid Apophis from its possible collision course with Earth. While NASA claims that the chances of Apophis colliding with Earth are only about 1 in 250,000, it does demonstrate that shooting objects at asteroids to knock them out of the way is a definite possibility [source: Discovery News].

For more information about bombs, asteroids and bombs blowing up asteroids, visit the links on the next page.

What Are the Chances?

The need to defend against a large asteroid is slim, but it's not out of the realm of possibility. NASA scientists estimate that an object larger than 400 meters (1,312 feet) in diameter could collide with Earth about once every 160,000 years [source: Graham].

How Area 51 Works
Mercury: Fast, Pockmarked and Shrinking
Haumea, a Dwarf Planet in the Kuiper Belt, Has Its Own Ring