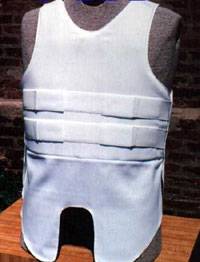 Humans have been wearing armor for thousands of years. Ancient tribes fastened animal hide and plant material around their bodies when they went out on the hunt, and the warriors of ancient Rome and medieval Europe covered their torsos in metal plates before going into battle. By the 1400s, armor in the Western world had become highly sophisticated. With the right armor, you were nearly invincible.

­All that changed with the development of cannons and guns in the 1500s. These weapons hurl projectiles at a high rate of speed, giving them enough energy to penetrate thin layers of metal. You can increase the thickness of traditional armor materials, but they soon become too cumbersome ­and heavy for a person to wear. It wasn't until the 1960s that engineers developed a reliable bullet-resistant armor that a person could wear comfortably. Unlike traditional armor, this soft body armor is not made out of pieces of metal; it is formed from advanced woven fibers that can be sewn into vests and other soft clothing.

Hard body armor, made out of thick ceramic or metal plates, functions basically the same way as the iron suits worn by medieval knights: It is hard enough that a bullet or other weapon is deflected. That is, the armor material pushes out on the bullet with the same force (or nearly the same force) with which the bullet pushes in, so the armor is not penetrated.

Why would body armor be made with ceramic plates? Bathroom tile is made of ceramic and it is extremely brittle and fragile. What good is it in body armor?

It turns out that there are thousands of different materials classified as ceramics. The ceramic used in body armor is called alumina, with the chemical formula Al2O3. Sapphires are made of alumina, and sapphire is a very strong material (see this site).

You can also find rigid plates made out of the plastic polyethylene. It is t­hicker than ceramic and not quite as strong, but lighter.

Also, check out this article that explains how body armor could be a technological hero of war in Iraq. 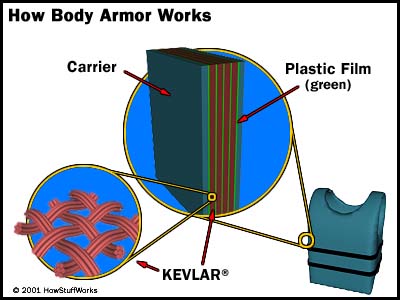 In a bulletproof vest, several layers of bullet-resistant webbing (such as KEVLAR) are sandwiched between layers of plastic film. These layers are then woven to the carrier, an outer layer of traditional clothing material.

Soft body armor is a fairly mystifying concept: How can a soft piece of clothing stop bullets? The principle at work is actually quite simple. At its heart, a piece of bullet-proof material is just a very strong net.

To see how this works, think of a soccer goal. The back of the goal consists of a net formed by many long lengths of tether, interlaced with each other and fastened to the goal frame. When you kick the soccer ball into the goal, the ball has a certain amount of energy, in the form of forward inertia. When the ball hits the net, it pushes back on the tether lines at that particular point. Each tether extends from one side of the frame to the other, dispersing the energy from the point of impact over a wide area.

The energy is further dispersed because the tethers are interlaced. When the ball pushes on a horizontal length of tether, that tether pulls on every interlaced vertical tether. These tethers in turn pull on all the connected horizontal tethers. In this way, the whole net works to absorb the ball's inertial energy, no matter where the ball hits.

If you were to put a piece of bulletproof material under a powerful microscope, you would see a similar structure. Long strands of fiber are interlaced to form a dense net. A bullet is traveling much faster than a soccer ball, of course, so the net needs to be made from stronger material. The most famous material used in body armor is DuPont's KEVLAR fiber. KEVLAR is lightweight, like a traditional clothing fiber, but it is five times stronger than a piece of steel of the same weight. When interwoven into a dense net, this material can absorb a great amount of energy.

In addition to stopping the bullet from reaching your body, a piece of body armor also has to protect against blunt trauma caused by the force of the bullet. In the next section, we'll see how soft body armor deals with this energy so that the wearer doesn't suffer severe injuries.

Kevlar is by far the most common fiber used to make body armor, but other materials are being developed.

The most readily available alternative fiber is called Vectran, which is approximately twice as strong as Kevlar. Vectran is 5 to 10 times stronger than steel.

Another rapidly emerging fiber is spider silk. Yes, spider silk. Goats have been genetically engineered to produce the chemical constituents of spider silk, and the resulting material is called Biosteel. A strand of Biosteel can be up to 20 times stronger than an equivalent strand of steel.Chicken feathers are also a possibility. University of Nebraska-Lincoln researchers are spinning them into cloth that is lightweight and very sturdy. Because the feathers have a fine honeycomb texture, they could be resistant to bullets.

Another candidate is carbon nanotubes, which promise to be even stronger than spider silk. Carbon nanotube thread is still rare, and fabric is even rarer. CNet reports the current price of nanotubes at $500/gram. In time, prices should fall and make carbon nanotubes a viable fiber for body armor. 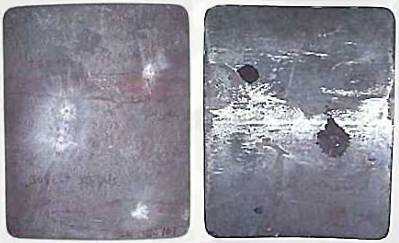 The front (left) and back (right) of a hard-armor steel plate. The plate has been shot with several different rifle rounds, all of which were deflected. The highest caliber round created a slight dent in the back of the plate, but none of the shots would have caused significant blunt trauma.
Photo courtesy Bullet Proof ME

In the last section, we saw that a piece of soft bulletproof material works in the same basic way as the net in a soccer goal. Like a soccer goal, it has to "give" a certain amount to absorb the energy of a projectile.

When you kick a ball into a soccer goal, the net is pushed back pretty far, slowing the ball down gradually. This is a very efficient design for a goal because it keeps the ball from bouncing out into the field. But bulletproof material can't give this much because the vest would push too far into the wearer's body at the point of impact. Focusing the blunt trauma of the impact in a small area can cause severe internal injuries.

Bulletproof vests have to spread the blunt trauma out over the whole vest so that the force isn't felt too intensely in any one spot. To do this, the bulletproof material must have a very tight weave. Typically, the individual fibers are twisted, increasing their density and their thickness at each point. To make it even more rigid, the material is coated with a resin substance and sandwiched between two layers of plastic film.

A person wearing body armor will still feel the energy of a bullet's impact, of course, but over the whole torso rather than in a specific area. If everything works correctly, the victim won't be seriously hurt.

Since no one layer can move a good distance, the vest has to slow the bullet down using many different layers. Each "net" slows the bullet a little bit more, until the bullet finally stops. The material also causes the bullet to deform at the point of the impact. Essentially, the bullet spreads out at the tip, in the same way a piece of clay spreads out if you throw it against a wall. This process, which further reduces the energy of the bullet, is called "mushrooming."

No bulletproof vest is completely impenetrable, and there is no piece of body armor that will make you invulnerable to attack. There's actually a wide range of body armor available today, and the types vary considerably in effectiveness. I

We just saw that modern soft body armor consists of several layers of super-strong webbing. This material disperses the energy of a bullet over a wide area, preventing penetration and dissipating blunt trauma. This sort of armor, as well as hard armor, ranges considerably in effectiveness, depending on the materials used as well as the armor design.

In the United States, body armor levels are certified by the National Institute of Justice (NIJ), which is an agency of the U.S. Department of Justice. The levels are I, II-A, II, III-A, III, and IV. Based on extensive laboratory tests, researchers classify any new body-armor design into one of seven categories: Category I body armor offers the lowest level of protection, and category IV offers the highest. The body-armor classes are often described by what sort of weaponry they guard against. The lowest-level body armor can only be relied on to protect against bullets with a relatively small caliber (diameter), which tend to have less force on impact. Some higher-grade body armor can protect against powerful shotgun fire. Categories I through III-A are soft and concealable. Type III is the first one to utilize hard or semi-rigid plates.

Generally speaking, armor with more layers of bulletproof material offers greater protection. With some bulletproof vests, you can add layers. One common design is to fashion pockets on the inside or outside of the vest. When you need extra protection, you insert metal or ceramic plates into the pockets. When you don't need as much protection, you can wear the vest as ordinary soft armor.

To determine how effective a particular armor design is, researchers shoot it with all sorts of bullets, at all sorts of angles and distances. For a piece of armor to be considered effective against a particular weapon at a particular range, it has to stop the bullet without causing dangerous blunt trauma. The researchers determine blunt trauma by molding a layer of clay onto the inside of the armor. If the clay is deformed more than a certain amount at the point of impact, the armor is considered ineffective against that weaponry. 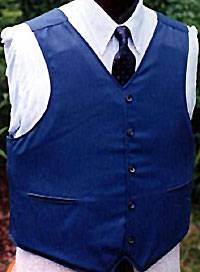 Armor effectiveness and comfort are sure to improve in the future as technology companies develop lighter, stronger materials. We are certainly a long way from impenetrable armor; but in 50 years, advanced armor will give police officers a much greater level of protection when they're walking the beat. Most likely, we will also see an increase in civilian body armor in the years ahead. There is an ever-growing market for comfortable soft body armor that can fit under clothes, or even be worn as an outer jacket. With gun violence on the rise, many citizens feel as if they're walking onto a battlefield every day, and they want to dress accordingly.

To learn more about civilian body armor, and the many other sorts of body armor on the market, check out the links on the next page.