Sniffing Around an Airport Near You 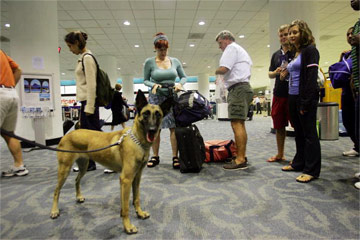 As part of U.S. security, bomb-sniffing dogs work anywhere there might be an explosive. That includes:

Militaries often use bomb-sniffing dogs in war. Every branch of the U.S. military employs them. The dogs help find an enemy through its artillery and make sure an area is safe for troops to pass. As of 2011, bomb-sniffing dogs are serving in Iraq and Afghanistan, says Gerry Proctor, a spokesperson for training missions at Lackland Air Force Base.

U.S. Customs and Border Protection (CBP) also depends on bomb-sniffing dogs. They monitor for weapons and explosives that could be entering the United States. CBP's animals sniff cargo warehouses at ports, as well as passengers and luggage arriving by ship. You'll also find them at land border-crossings, nosing around incoming cars [source: USCBP].

If you've felt something sniff your hand luggage at a U.S. airport, you've probably met a dog working for the Transportation Security Administration (TSA). The TSA's job is to make public travel safe. As you can imagine, many TSA dogs work at airports. They sniff passengers and hand luggage at security checkpoints. If someone reports a suspicious package or incident on a plane, bomb dogs sniff the aircraft, its passengers and its cargo hatch. You'll also see TSA dogs monitoring the aisles of ferries, trains and city subways.

Local police also use bomb-sniffing dogs. They patrol at crowded public events, like the Olympics, and they check schools and workplaces when there are bomb scares.

So far, we've talked about dogs that work for the public. Private agencies also train bomb-sniffing dogs and rent them out. In fact, after Sept. 11, 2001, many entities, including corporations, cruise ships, and individuals hired the dogs as a security cushion [source: Ramirez].

You can think of bomb-sniffing as a one-way game of fetch. On the next page, find out if training is really as easy as throwing a stick.