If you've read the HowStuffWorks article How Aircraft Carriers Work, then you know about many of the amazing features of aircraft carriers:

What this means is that an aircraft carrier is worth between $4 billion and $5 billion -- it is a substantial investment by itself. Plus, it is carrying a small town's worth of people as well as a billion dollars in aircraft. 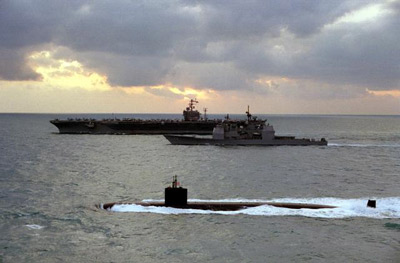 In this article, you will learn about these powerful collections of military force and see why they have become so important to U.S. naval operations.

An aircraft carrier allows the U.S. navy to move an entire airport, along with 70 to 80 fighters, bombers and support aircraft, anywhere in the world where there is an ocean. This ability gives the United States incredible flexibility, because there is no need for treaties or permission from other nations. With a speed of approximately 700 nautical miles per day and bases on both the east coast of the United States and in Hawaii, aircraft carriers can arrive anywhere in the world in less than two weeks. 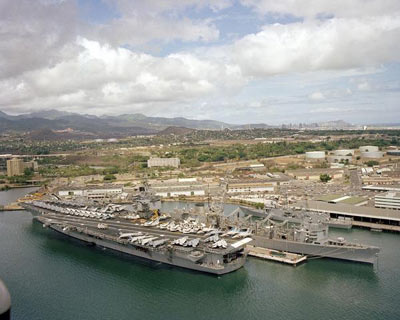 The carrier battle group is responsible, therefore, for protecting the aircraft carrier at the center of the group.

There may be other ships that travel with the group. For example, there may be troop ships, amphibious ships for the marines, cargo ships carrying tanks and other equipment, mine sweepers, etc. It all depends on the mission. 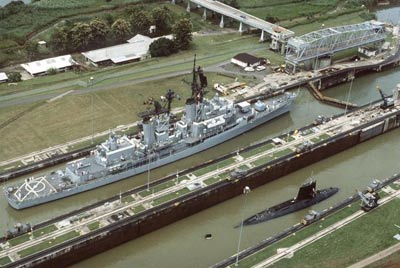 The Carrier Battle Group in Action

When a carrier battle group arrives at its destination, the 10 or so ships deploy and begin operations. There are approximately 80 aircraft available, and perhaps 8,000 men and women at work. There are two goals:

The defensive role is an around-the-clock operation. Carrier battle groups must be constantly vigilant against attack from the air, from the sea and from underwater.

To accomplish its mission, a carrier air wing typically consists of nine squadrons, with 70 to 80 total aircraft. The more notable aircraft include:

To provide a defensive view of the area, the destroyers have powerful radar systems that look upward to search for incoming aircraft. The E-2C Hawkeye aircraft launched from the carrier fly overhead and use their radar to look downward, letting them see low-flying aircraft and ships that may be approaching from over the horizon. The destroyers and frigate use sonar and magnetic sensors to look for submarines approaching from underwater. The goal is to create a sealed bubble around the carrier, with nothing able to enter the bubble without approval.