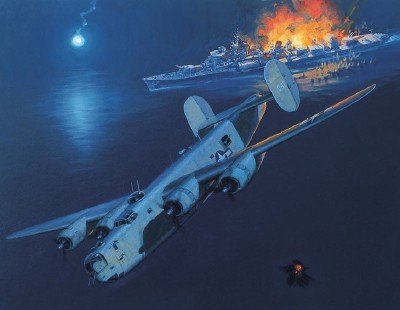 Design of what would become the Consolidate B-24 Liberator bomber began in 1939, when the USAAF requested a longer-range follow-on to the B-17. A prototype flew at the end of 1939 and the plane entered service in 1941. See more classic airplane pictures.
g

The Consolidated B-24 Liberator, a large bomber, was the most prolific American plane of World War II, with more than 18,000 built. It was in great demand for a wide variety of roles, including carrying cargo and passengers, antisubmarine work, bombing, reconnaissance, and special operations. Its name will be forever linked with the brilliant but costly August 1943 USAAF raids on the Ploesti oil fields in Rumania.

The Consolidated B-24 Liberator was a slab-sided bomber that featured the "Davis wing." This slender, high aspect-ratio wing (the ratio of the length to

the width of the wing) was equipped with high-lift Fowler flaps. The Davis wing promised speed and range greater than what would be possible with earlier designs.

The Consolidated B-24 Liberator was the first large aircraft with retractable, tricycle-type landing gear.
m

Reuben Fleet, the owner-manager of Consolidated, had his doubts. But his own engineers convinced him, and the Davis wing was adopted for veteran designer Isaac Laddon's new bomber project. A government contract was awarded on January 20, 1939. Incredibly, the XB-24 made its first flight just barely more than 11 months later, on December 31, 1939.

built, including one by Ford at Willow Run, Michigan. The Consolidated B-24 Liberator fought in every theater, but was at its best in the Pacific, where its long range was invaluable. Its greatest contribution to the war effort, however, came over the cold, gray skies of the Atlantic, where the wide-ranging Liberators sealed off the last remaining open sea area from prowling German U-boats.

The Consolidated B-24 Liberator was not as aesthetically attractive as the B-17 bomber, nor did it win the same popular regard from the public. Forced to fly at lower altitudes over Europe than the B-17, the B-24 incurred many combat losses and was not considered as "rugged" as the Boeing bomber. Nonetheless, its crews grew to love it, and they still vociferously insist that the Liberator was a better plane than the Fortress.