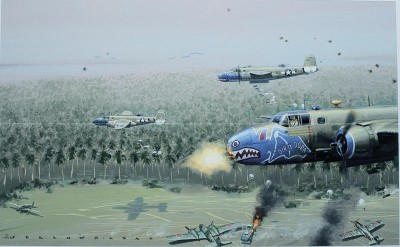 The North American B-25 Mitchell was versatile, and demand for it was great. No other twin-engine bomber of World War II saw greater production. It was a plain-and-simple bomb dropper in Europe, but gained forward-firing guns for duty in the Pacific.
g

The North American B-25 Mitchell remained an understated airplane, even though it fought throughout World War II and delivered many of the most important blows of the war. Handsome rather than beautiful, the twin-engine B-25 was clean, but lacked the flashy, sinuous lines of the Martin B-26 or the purposeful lean-avenger looks of the Douglas A-26.

Instead, the North American B-25 Mitchell looked like what it was, a product of Dutch Kindelberger's North American team -- efficient, easy to manufacture and repair, and able to do any job assigned to it. It was worthy to bear General Billy Mitchell's name.

The prototype NA-40 was first flown in ­January 1939 by Paul Balfour, a flight that would lead to almost 11,000 copies being built. When the production version of the B-25 first flew on August 19, 1940, the airplane had been given additional power in the form of its Wright GR-2600 engines. The initial B-25 was lacking in directional stability, and examples after number ten had the wings "gulled" to re­­duce the amount of dihedral (the angle be­tween the wing and an intersecting horizontal).

The B-25 became enshrined in history when Lt. Col. James H. Doolittle led 16 Mitchells from the deck of the U.S.S. Hornet in an epic April 18, 1942, raid on Tokyo. The raid did not do much physical damage, but it lifted American military and civilian morale, shocked the Japanese populace, and more important, convinced Admiral Isoroku Yamamoto that he had to attack the American stronghold at the Battle of Midway -- a fatal error.

Although they fought effectively on every front, the B-25s became the scourge of Japanese shipping, and some models used a 75-mm gun for strafing attacks. After the war, TB-25s were used for pilot training. The B-25 was a pleasurable aircraft to fly, excellent in formation, and easy to land. It was a true North American, that is, a thoroughbred.