by Michelle Kim
NEXT PAGE 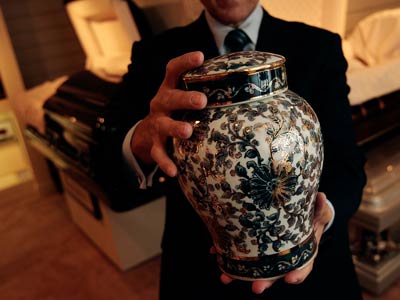 How do you want your body to spend eternity? In space, mingling with the stars? Or perhaps as part of a sparkling diamond on someone's finger? Or, if you're looking for something more lively, maybe even nestled among colorful underwater creatures as an artificial coral reef bank? These are just a few of the things people are doing with the cremated remains of their loved ones.

Though people might picture a majestic, flaming Viking ship or a roaring, open-air funeral pyre when talking about cremation, modern-day cremations are much more likely to occur at crematories with industrial machines that efficiently incinerate human bodies.

Cremation is the process of burning a dead body at very high temperatures until there are only brittle, calcified bones left, which are then pulverized into "ashes." These ashes can be kept in an urn, buried, scattered or even incorporated into objects as part of the last rites of death.

Though it's gone in and out of fashion since prehistoric times, in the last couple centuries, the rates of cremation have picked up as cultural taboos begin to fall away and modern pressures shape funerary needs.

Some people turn to cremation over burial or entombment because of the convenience, finding it more practical or cheaper to handle ashes instead of a body. Others might be squeamish about the idea of decay and are attracted to the "sanitizing" effect of flames, while some people find it fitting with their spiritual beliefs. Whatever the reason, more and more people are choosing cremation.

In this article, we'll see what happens during a cremation, delve into the history of cremation, find out who's cremating and who's not, and dispel some myths about what happens when human bodies meet fire.