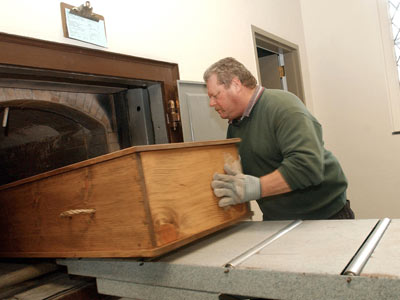 Regulation of cremation and crematories varies from country to country. The U.K. has comprehensive laws on its books dating back to 1902 outlining requirements and restrictions on where and when cremation could take place.

In the United States, regulation often falls under state or local government, and the state laws range from fairly comprehensive to lax with little oversight. The Federal Trade Commission, which regulates the funeral industry, isn't involved with crematories [source: Nicodemus]. Twenty-three of the 50 states license their crematories, according to CANA. Scandals involving crematories in recent years have occasionally pushed state legislators into beefing up these laws.

In early 2002, investigators were astounded by what they found when they looked into an anonymous tip about the Tri-state Crematorium in Noble, Ga.: More than 300 bodies sent for cremation by funeral homes from Georgia, Tennessee and Alabama were instead piled or scattered in various states of decay in the crematorium's vaults, garages and woods.

Tri-state, an independent, unlicensed crematory owned by the Marsh family, had reportedly stopped burning bodies when the incinerator broke down. For years, instead of cremated remains, they had been giving families urns of wood ash and cement.

Strangely, there were no laws on the books against not burning a body, and prosecutors could only charge the operator of the crematorium, Ray Brent Marsh, with fraud and theft for accepting money for services not rendered.

As a result of the scandal, Georgia expanded the definition of corpse mistreatment to include abandonment and disposal. It also closed the loophole that had allowed Tri-state to operate without a license because it didn't serve the public directly. Now all Georgia crematories are required to be inspected and licensed.

A Lake Elsinore, Calif., crematorium owner was accused of selling body parts for medical research -- including heads and torsos -- of the bodies he was paid to cremate. He was sentenced to 20 years in prison after pleading guilty in 2003. Despite the headlines, the donated body parts market for research and education is still largely unregulated.

More recently, in Mississippi, crematory operator Mark Seepe had his license pulled after accusations and evidence of mixing human remains, giving the wrong ashes to the wrong families, and even dumping remains into trash bins. In response, the state legislature passed regulations requiring training for crematory operators and tougher rules for crematories.