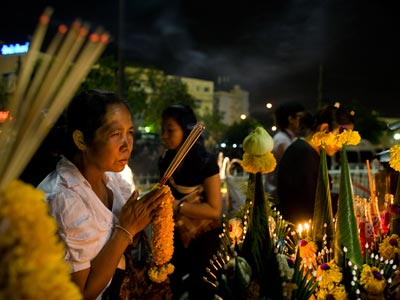 A woman prays as people gather and pay homage to the late Thai Princess Galyani Vadhana during her cremation ceremony near the royal palace on Nov. 15, 2008 in Bangkok.
Paula Bronstein/Getty Images

Burning a corpse as a final rite of passage has been in practice since prehistoric times. There is evidence that people cremated bodies in China as early as 8000 B.C. Cremation was commonly adopted in some parts of Greece but never became widespread, disappearing by 480 B.C. In Sweden, the majority of funerals were cremations throughout the Iron Age and Viking Age, but stopped once Christianity was introduced (A.D. 1050). In the western Roman empire, cremation was the standard until the first century A.D., often associated with military honors. With the spread of Christianity, cremation was frowned upon and disappeared for the most part in Europe by the fifth century A.D., except in unusual cases such as epidemics or war.

During the French Revolution, groups such as the Freemasons, revolutionaries and anarchists promoted cremation as a way of reducing the church's role in the funeral process. Partly because of this association, the Roman Catholic Church opposed the use of cremation until the 20th century.

In Asia, cremation became popular in areas of Buddhist influence under certain dynasties in China and Korea until about A.D. 1300. The advent of Neo-Confucianism in the 14th century brought burials back to the forefront in parts of Asia.

Modern cremation began in the late 1800s with the invention of a practical cremation chamber by Professor Brunetti, who presented it at the 1873 Vienna Exposition. Championed by Queen Victoria's surgeon, Sir Henry Thompson, and driven by public concern for hygiene and health and clerical desires to reform burial practices, crematories slowly began opening in Europe and abroad. The first modern crematory in America was established in Pennsylvania in 1876.

Today, cremation is practiced in at least 31 countries around the world, with rates ranging from less than 2 percent in Ghana to more than three-quarters of the deaths in Switzerland [source: Davies].

On the next page, see how different religious views of the human body lead to different attitudes toward cremation.