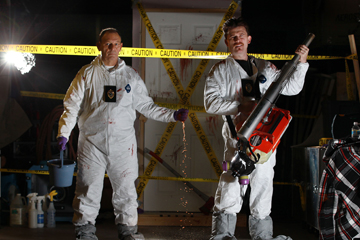 Death, people say, can be messy. It's bandied about in a figurative way, as in the complexities of human existence. But death can be literally messy, and shockingly so. As in blood on the living room walls.

Most of us, if we're lucky, only know this from TV. "CSI" and "Law & Order" show us all the post-death activity. Police officers, paramedics, crime-scene investigators and coroners are at the scene of a violent incident, checking the victim, questioning, collecting evidence, recording the scene and finally removing the body. What you seldom see on TV is what happens after that: All those professionals gone, family members standing in a room still covered in blood, facing the prospect of living, even temporarily, with that scene. Because one thing those professionals do not do is clean it up.

Removing the evidence of a violent death is the responsibility of the victim's family. And as recently as the early 2000s, there were very few cleaning companies that would handle that kind of job, so the family members had to do it themselves – an almost unimaginable task for the shocked and grieving. If ever there were a situation begging for capitalism to step in, this was it.

The late '90s saw the birth of a whole new industry called crime scene clean-up. That's the common name, anyway. It's more accurately called CTS decon – crime and trauma scene decontamination – since most of the events these cleaners deal with aren't crimes [source: Whitmarsh]. But crime or not, mopping up after a traumatic death is not only a potentially horrific task. It also requires a significant amount of training and special knowledge to complete properly, and companies charge hundreds of dollars an hour for their service. Most people, though, would pay even more. The job is hazardous, grueling and not for the faint-of-heart. Or stomach.