The Hazards: Blood and Guts 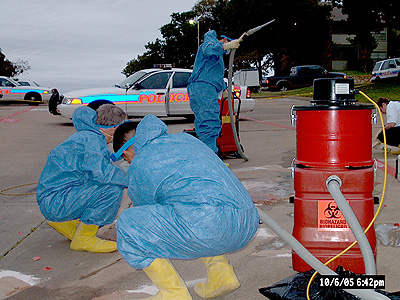 Cleaning up after a murder outside an apartment complex.
Photo courtesy of AMDECON

The site of a messy death poses dangers not everyone can see. In addition to the infection that can result from bloodborne pathogens, any bodily fluids that remain in floors, baseboards or walls can end up making people sick months or years later. The area has to be truly clean, not just apparently clean.

Cleaning up after a violent death can take anywhere from one hour to 40 hours or more [source: Sahadi]. It all depends on the type of trauma and the amount of biohazardous material at the site. Cleaners use hospital-grade disinfectant to wipe or scrub every drop of blood from all surfaces, including counters, ceilings, walls, light fixtures, glass trinkets, family pictures, artwork and appliances. They scrape brain matter off of walls and collect any bone fragments embedded in the drywall. They rip out and discard blood-soaked carpeting and remove blood-soaked upholstery, window treatments or rugs. Sometimes, they need to collect and remove small pieces of the body – the coroner takes most of it, but if it was a particularly violent death, there may parts left behind.

In a "decomp," the scene is usually not as spread out, but a decomposing body can be even more gruesome than a shooting or stabbing. A body that has been deceased for days, weeks or months has gone through some changes. After death, the body swells, insects move in, organs digest themselves and skin liquefies. It's not pretty, but most people will tell you that the sight of a decomposing body can't compare to the smell, which is partly a result of ammonia gas released during decomposition. The coroner removes the body but usually leaves behind lots of liquefied matter as well as maggots filled with the deceased's blood. In addition to cleaning up the mess, cleaners sometimes have to track down and burn any maggots that scurried out of the body, because they're carrying pathogens.

The scene of a methamphetamine lab, on the other hand, typically doesn't have the "gross factor" of a death scene, but it's often a lot more dangerous to clean up.