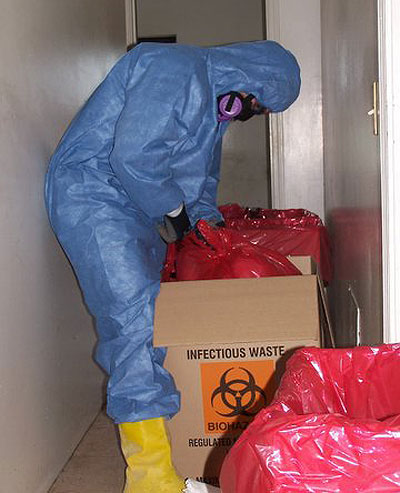 This worker is packaging biohazardous waste for transport.
Photo courtesy of NECSC

In terms of health risks, a meth lab clean-up is about as scary as it gets. The laundry list of poisons used to make street-grade methamphetamine (including acetone, methanol, ammonia, benzene, iodine and hydrochloric acid) leaves a toxic residue that coats and infuses every surface and stays in the air. Most of these poisonous substances are absorbed through the skin, making a meth lab one of the most dangerous places a person can walk into. Exposure to a meth lab can cause reproductive disorders, birth defects, blindness, lung damage, liver damage and kidney damage, and that's just for starters. The scene remains toxic indefinitely unless it's properly cleaned – an apartment that housed a meth lab can make its tenants sick a decade after the lab has been removed.

Proper clean-up of a meth lab involves disposing of everything porous and everything that can't be submerged in detoxification chemicals (several times). Crime-scene cleaners get rid of all furniture, cabinetry, light fixtures, carpeting, electronics, basically everything that isn't part of the structure. And in the worst cases, they also dispose of most of the structure – they sometimes have to pull up all of the flooring and gut the walls, removing all of the drywall until nothing remains but studs [source: International Association of Firefighters].

Regardless of the type of scene, the final step in a clean-up is disposing of the evidence. You can't put hazardous or biohazardous waste in a regular trash dump, so transport and disposal can be a big percentage of a clean-up bill. Crime-scene cleaners need a special permit to transport that waste, and they have to pay special fees to dispose of it. In the case of human remains, they have to pay (typically by the pound) to burn it in a medical-waste incinerator. Some incinerators have minimum amounts they'll burn, so the cleaning company might have to pay to store the refuse in a sealed, refrigerated area until they've collected the minimum amount. In the case of poisonous chemical waste, you can only dump it in special areas not accessible to the public, which incurs additional fees.

If cleaning up blood and brains and poisonous waste sounds perfectly manageable to you, you might be a candidate for a career in crime-scene clean-up. Or then again, you may not. It's complicated.