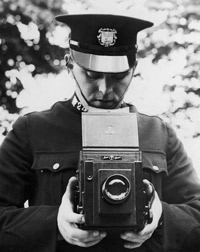 Early detectives used to sketch the scene of a crime. Photography introduced a way to produce images that were more true-to-life and credible than drawings. And while an honest and technically sound photograph can record the ori­ginal state of a crime scene, it's simple enough to manipulate a photograph or record an image that's drastically different from reality.

A good photograph of a crime scene must meet certain technical specifications: correct exposure, sharp focus and maximum depth of field, the portion of the photograph that appears sharp. The image must also be free from distortion. Such technical standards produce photos that will actually aid agents in their investigation of a crime.

But there are additional qualities that make a photo admissible in court. The image pictured cannot alter the scene or evidence -- say through strategic blocking with a measuring device or an intentionally shallow depth of field. The image must also be relevant to the case and should be composed with technical precision in mind, not emotional appeal.

Photographers might vary their kit based on personal preferences or the type of crime scene but most carry certain basics: a camera, obviously, and maybe even multiple cameras; filters; electronic flashes; various lenses for wide-angle, mid-range and close-up shots; a tripod; a measuring device; a gray card, which when combined with a light meter helps produce correctly exposed photographs; and a way to protect equipment from rain or extreme heat or cold.

Crime scene photographers usually use color images although black and white can be useful when documenting evidence that relies more on texture than color like latent fingerprints.

But do photographs of crime scenes serve any other purposes? Find out about a more artistic side of utilitarian images in the next section.

Forensic photographers first began using digital imaging technology in 1992 [source: Wireless News]. But until recently, there was no uniform system of teaching digital processing, treatment and analysis. As most digital work is performed on the graphics editor Photoshop, the 2007 manual "Photoshop CS3 for Forensics Professionals: A Complete Digital Imaging Course for Investigators" aims to clarify the process of correcting and archiving forensic images. The book even throws in asides rarely found in an editor's manual, such as tips on providing testimony in court