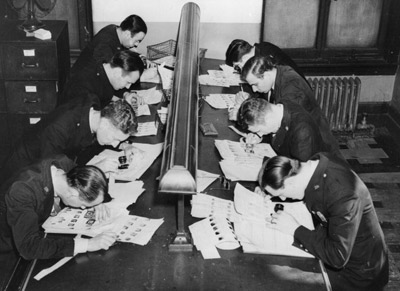 A woman has been murdered. When the detectives arrive on the scene, the house is in shambles. Clothes are strewn about the floor, lamps are ov­erturned and there's no sign of the assailant. Then, one of the detectives picks up a glass. On its side is a smudged, bloody thumbprint. He takes it down to the lab, where it's analyzed and matched to a recorded set of prints. The detectives catch their killer.

­This scen­e has been replayed in one crime drama after another. Ever since scientists discovered that every person's fingerprints are unique, and police officers realized this singularity could help them catch criminals, fingerprints have been an integral part of the law enforcement process. Today, fingerprints are also used to prevent forged signatures, identify ­accident victims, verify job applicants and provide personalized access to everything from ATMs to computer networks.

But fingerprinting has come a long way from the days when police officers lifted prints from a crime scene and checked them manually against their files. Modern fingerprinting techniques can not only check millions of criminal records simultaneously, but can also match faces, backgrounds and other identifiable characteristics to each perpetrator.

What are the basic characteristics of a fingerprint? How long have people been using prints as a form of identification? Find out in the next section.

Can your fingerprints be changed -- or stolen?

A minor scrape, scratch or even burn won't affect the structure of the ridges in your fingerprints -- new skin reforms in its original pattern as it grows over the wound. But each ridge is also connected to the inner skin by small projections called papillae. If these papillae are damaged, the ridges are wiped out and the fingerprint destroyed.

Some criminals have tried to evade capture by tampering with their own fingerprints. Chicago bank robber John Dillinger reportedly burned his fingertips with acid in the 1930s. Recently, a man in Lawrence, Mass., tried to hide his identity by cutting and stitching up all ten of his fingertips (fortunately, a police officer recognized his face).

But as fingerprint technology becomes a common form of authentication from bank vaults to luxury cars, law enforcement officials worry that would-be criminals might try to steal entire fingers for the prints. In one case, robbers in Malaysia cut off a man's fingers so they could steal his Mercedes. Companies that make biometrics security equipment realize the potential dangers of this system, and are now creating scanners that detect blood flow to make sure the finger is still alive.