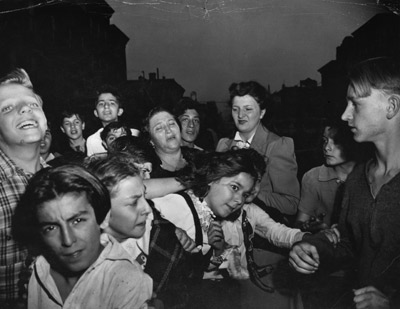 In 2001, police officers and artists uncovered a treasure trove in a city records warehouse. They found a stockpile of forensic photo negatives from the Los Angeles Police Department -- some dating back to the 1920s. The images include every-day crimes, as well as the most infamous murders and biggest busts in the city's history.

­Struck by many of the images' captivating, almost movie-like quality, the artists and officers launched an effort to preserve the negatives, some of which were beginning to decompose. They also launched an exhibition of the archive and sent it around the United States. A lieutenant who helped present the archive explained that the images' morbid artistic quality was a result of less-scrupulous forensics standards in times past. The photographers were sometimes willing to fiddle with a crime scene in order to produce the best shot. Consequently, the photos, though they still functioned as evidence, look more like art than modern crime scene shots.

However, art and crime scene photography have long been linked. The New York City freelance press photographer Weegee made a name for himself by capturing images of crime scenes, news sites and movie premiers with equal frankness and occasional irony. In 1941, he staged a solo exhibition at the Photo League in New York entitled "Weegee: Murder is my Business."

But it's not terribly surprising that people display a fascination with crime scene photography. The often grisly images are set in such normal locations -- the steak house, the parlor or the street -- and subsequently elicit a morbid curiosity. They're strangely like everyday life, yet entirely different and wholly unsettling.

To learn more about CSI, crime-scene clean-up and cameras, investigate the links below. ­

Austrian-born Arthur Fellig took on the name Weegee after observers compared his keen sense for arriving early at a crime scene to a Ouija board. His phonetic spelling of the word produced the name Weegee [source: Getty]

While the photographer credited this sixth sense to an itchy feeling in his elbows, he was also likely aided by his proximity to police headquarters, his paid informants and his special police radio. In addition to his freelance photography, Weegee worked as a consultant in Hollywood and compiled the 1945 photo essay, "Naked City" which inspired the 1947 movie, "The Naked City."