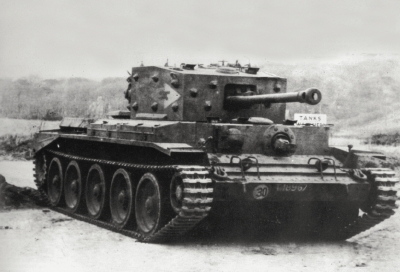 By 1941 the British General Staff was convinced of the need for a tank that was faster and more heavily gunned than either the Matilda II or the Matilda II's replacement, the Churchill Infantry Tank, which could only travel at 15.5 miles per hour and was equipped with only a 40mm gun.

Experience in the Western Desert of North Africa showed that once enemy tanks were defeated, friendly tanks had to be able to fire high-explosive rounds in support of infantry. As a result, new specifications were published, and a fast tank useful in cavalry and infantry support roles was put into development.

After several false starts, the British General Staff settled on a tank design known as the Cromwell A-27M Infantry Tank. It was to be powered by the Rolls Royce Merlin engine used in the Spitfire and Hurricane fighter aircraft but detuned from 1,075 to 600 horsepower.

This was more than sufficient to move the Cromwell's 31 tons at speeds up to 40 miles per hour. This top speed was later reduced to 38 miles per hour when it was discovered that the chassis could not withstand the faster speed.

A six-pounder (57mm) gun was selected as the main armament because it was considered powerful enough to penetrate Nazi German armor in frontal attacks. But the six pounder was found to be substandard when firing a high-explosive round against troops.

The six pounder was also easily outranged by antitank gunners equipped with the 88mm antitank gun. A search was begun for a larger round and gun to provide the needed firepower.

By early 1943 the British had gained substantial experience with the American M-4 Sherman, which was equipped with a 75mm gun. The solution to the Cromwell's poor firepower was to use a gun similar to the Sherman's on the Cromwell.

It helped that ammunition was plentiful from the American Lend Lease program and from captured Vichy French (the French government that collaborated with the Nazi Germans) stocks in Syria.

The 57mm gun was bored out to accommodate the 75mm round, the barrel was shortened, and a muzzle brake was added. Two BESA 7.92mm machine guns were also mounted, one in the turret coaxial with the main gun and the other in the hull.

The limited scope of the hull machine gun made it of questionable value, and it was often left out in later production.

To learn more about the Cromwell A-27M Infantry Tank's performance, continue to the next page. 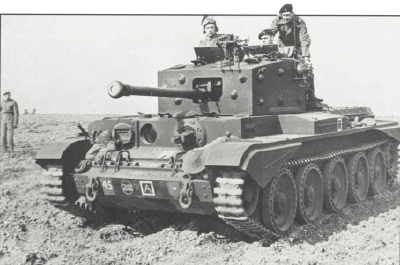 Many Cromwell Cruiser Tanks, such as this Cromwell A-27M Infantry Tank belonging to the Welsh Guards, had their 57mm guns re-bored to 75mm.
©2007 Publications International, Ltd.

Early variations of the Cromwell A-27M Infantry Tank had carried different combinations of engines and main guns, but the new 75mm gunned tank driven by the Merlin Meteor engine was designated the Cromwell IV.

From its introduction in early 1943 to the Normandy Invasion in June 1944, the Cromwell A-27M Infantry Tank was used to train new tank crews.

During Normandy, Cromwells went to France with the 7th Armored Division. Its combat debut was not a success.

The Cromwell was initially stymied by the small operating area beyond the beachhead, which did not allow its best features -- speed and agility -- to be used until the breakout from Caen.

Alter the Caen breakout, the Cromwell's Meteor engine became its greatest asset. It provided extreme agility and a good turn of speed and was very reliable. The Cromwell advanced at a rate of 70 miles per day after the breakout from the Normandy beachhead.

To deal with the latter, appliqué armor was bolted onto Cromwells to increase the tank's armor thickness from 2.5 inches to 3.9 inches.

The Cromwell A-27M Infantry Tank's chief advantage remained its superior agility and speed when compared with Nazi German tanks or the American M-4 Sherman. While the Cromwell was not a match for the Panther in a toe-to-toe slugging match, it was fast and maneuverable enough to take a Panther out from behind.

The Cromwell was too lightly gunned to effectively deal with Nazi German Tigers and Panthers. A new version, mounting a 77mm gun, appeared in November 1944.
©2007 Publications International, Ltd.

The next step in up-rating the Cromwell was to mount a larger gun. But the chassis was considered too small to take a larger turret. The chassis was lengthened by a little more than five feet, and a new turret, mounting a 17-pounder (76.2mm high-velocity) gun, was added.

This new tank was named the Challenger (not to be confused with the Challenger Main Battle Tank) and from its first appearance in early 1944 was used to support the Cromwell and provide heavy, long-range firepower.

But even the Challenger, with its more powerful gun, did not solve the problem of facing Panthers and Tiger Is.

A new tank was designed and built based on the Cromwell plan. Called the Comet, it mounted the 77mm 49-caliber gun. The gun was capable of penetrating 4.3 inches of armor angled at 30° at 500 yards. The Comet reached the front lines in November 1944.

While the Cromwell was overshadowed by the American M-4 Sherman, which could outperform it in most respects, the Cromwell made an important contribution to British armored tactics and to the race across northern Europe.

The Mark VIII Cromwell A-27M Infantry Tank was equipped with the new six-pounder gun and had a top speed of 32 mph. It went into production in 1943.
©2007 Publications International, Ltd.

U.S. Air Force Sets Speed Record With Magnetically Levitating Rocket Sled
Why do I have to join the French Foreign Legion under an assumed name?
Does Army experience help your civilian career?