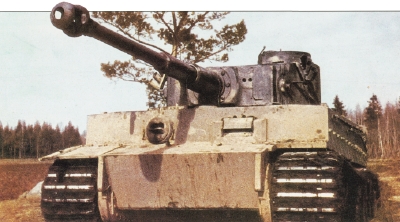 Although heavily protected by nearly 4 inches of armor plate, the Panzerkampfwagen VI Tiger I was heavy and lacked agility.
©2007 Publications International, Ltd.

The Panzerkampfwagen VI Tiger I was a heavily armored tank but had too many mechanical breakdowns.

In 1937 a specification was issued by the Nazi German General Staff for a Durchbruchwagen, a breakthrough in technology. But beyond a few studies, little happened until 1941, when Adolf Hitler became convinced of the threat of heavy tanks.

Hitler then approved the development of a German heavy tank that could meet the likes of the French Char B on a equal basis. When the Soviet T-34 Medium Tank and the KV-1 appeared on the eastern front in 1942, the specification was amended to include the 88mm high-velocity gun as the main armament.

The Panzerkampfwagen VI Tiger I initially weighed slightly more than 51 tons and was armed with an 88mm gun adopted from the famous and deadly 88mm antiaircraft gun that had also served effectively in an antitank role.

The Tiger was very heavily armored for its time -- up to 4 inches of steel armor on the hull and turret front. It also carried two 7.92mm Model 1934 machine guns, one mounted in the hull and the other coaxially with the main gun.

The Panzerkampfwagen VI Tiger I was powered by a 700-horsepower Maybach engine, and its road speed was listed as 24 miles per hour. But even with extra-wide tracks, the Tiger I's cross-country mobility was poor, and it was subject to frequent mechanical breakdowns.

It carried a crew of five: commander, gunner, and loader in the turret; driver and radio operator in the hull. As many as 92 rounds for the main gun could be carried in the turret and hull.

To learn more about the Panzerkampfwagen VI Tiger I's capabilities, continue on to the next page.