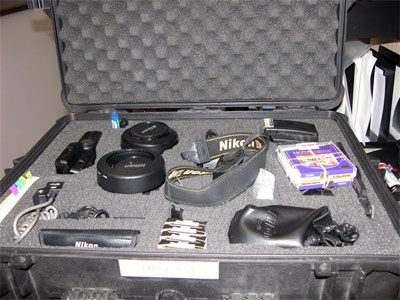 Joe Clayton's photography kit: He usually uses a digital Nikon D100 to photograph a crime scene. He might also use a Nikon N8008s (35-mm film format) for special applications.

­Th­e goal of crime-scene documentation is to create a visual record that will allow the forensics lab and the prosecuting attorney to easily recreate an accurate view of the scene. The CSI uses digital and film cameras, different types of film, various lenses, flashes, filters, a tripod, a sketchpad, graph paper, pens and pencils, measuring tape, rulers and a notepad at this stage of the investigation. He may also use a camcorder and a camera boom.

Scene documentation occurs during a second walk-through of the scene (following the same path as the initial walk-through). If there is more than one CSI on the scene (Mr. Clayton has been the sole CSI on a scene; he has also been one of dozens), one CSI will take photos, one will create sketches, one will take detailed notes and another might perform a video walk-through. If there is only one CSI, all of these jobs are his.

Note-taking at a crime scene is not as straightforward as it may seem. A CSI's training includes the art of scientific observation. Whereas a layperson may see a large, brownish-red stain on the carpet, spreading outward from the corpse, and write down "blood spreading outward from underside of corpse," a CSI would write down "large, brownish-red fluid spreading outward from underside of corpse." This fluid might be blood; it might also be decomposition fluid, which resembles blood at a certain stage. Mr. Clayton explains that in crime scene investigation, opinions don't matter and assumptions are harmful. When describing a crime scene, a CSI makes factual observations without drawing any conclusions.

CSIs take pictures of everything before touching or moving a single piece of evidence. The medical examiner will not touch the corpse until the CSI is done photographing it and the surrounding area. There are three types of photographs a CSI takes to document the crime scene: overviews, mid-views, and close-ups.

Overview shots are the widest possible views of the entire scene. If the scene is indoors, this includes:

These last shots might identity a possible witness or even a suspect. Sometimes, criminals do actually return to the scene of the crime (this is particularly true in arson cases).

Finally, the CSI takes close-ups of individual pieces of evidence, showing any serial numbers or other identifying characteristics. For these pictures, the CSI uses a tripod and professional lighting techniques to achieve the best possible detail and clarity -- these photos in particular will provide the forensics lab with views to assist in analyzing the evidence. The CSI also takes a second set of close-up shots that includes a ruler for scale.

Every photo the CSI takes makes it into the photo log. This log documents the details of every photo, including the photograph number, a description of the object or scene in the photograph, the location of the object or scene, the time and date the photograph was taken and any other descriptive details that might be relevant. Without a good photo log, the pictures of the scene lose a lot of their value. In the investigation of John F. Kennedy's assassination, the FBI photographers who attended the autopsy didn't create descriptions of the pictures they were taking, and investigators were later unable to distinguish between entrance and exit wounds in the photos.

In addition to creating a photographic record of the scene, CSIs also create sketches to depict both the entire scene, which is easier to do in a sketch than in a photograph because a sketch can span several rooms, and particular aspects of the scene that will benefit from exact measurements. The goal is to show locations of evidence and how each piece of evidence relates to rest of scene. The sketch artist may indicate details like the height of a door frame, the exact size of the room, the distance from the window to the door and the diameter of the hole in the wall above the victim's body.

Scene documentation may also include a video walk-through, especially in major cases involving serial killers or multiple homicides. A video recording can offer a better feel for the layout of the crime scene -- how long it takes to get from one room to another and how many turns are involved, for instance. Also, once the investigation is further along, it may reveal something that was overlooked at the scene because the investigators didn't know to look for it. During a video walk-through, the CSI captures the entire crime scene and surrounding areas from every angle and provides a constant audio narrative.

After the CSI has created a full record of the crime scene exactly as it was when he arrived, it's time to collect the evidence. Now he starts touching things.

Crime scene investigators do not clean up the scene -- neither do police officers, detectives or anyone else involved in the investigation. The task of cleaning up a gruesome crime scene often falls to the victim's family members. In the last 10 years, however, some people have recognized the need for hired crime-scene cleaners to take care of the job so family members and landlords don't have to, and some of these people have formed companies dedicated to the task. It's a dirty, sometimes hazardous, very high-paying job. Crime-scene clean-up can run up to $200 an hour on top of flat fees (in the thousands) and equipment costs. Cleaning up a meth lab is especially expensive because of the risk to anyone who enters the scene and the amount of work involved in making the area habitable again