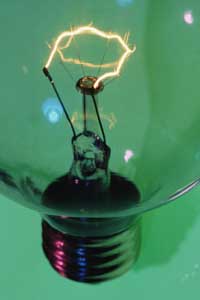 Along with voltage and current, resistance is one of the three basic units in electricity. As explored below, the glowing filament in an incandescent light bulb allows us to view resistance in action.
PhotoLink/Photodisc/Getty Images

As mentioned earlier, the number of electrons in motion in a circuit is called the current, and it's measured in amps. The "pressure" pushing the electrons along is called the voltage and is measured in volts. If you live in the United States, the power outlets in the wall of your house or apartment deliver 120 volts each.

If you know the amps and volts involved, you can determine the amount of electricity consumed, which we typically measure in watt-hours or kilowatt-hours. Imagine that you plug a space heater into a wall outlet. You measure the amount of current flowing from the wall outlet to the heater, and it comes out to 10 amps. That means that it is a 1,200-watt heater. If you multiply the volts by the amps, you get the wattage. In this case, 120 volts multiplied by 10 amps equals 1,200 watts. This holds true for any electrical appliance. If you plug in a light and it draws half an amp, it's a 60-watt light bulb.

Let's say that you turn on the space heater and then look at the power meter outside. The meter's purpose is to measure the amount of electricity flowing into your house so that the power company can bill you for it. Let's assume -- we know it's unlikely -- that nothing else in the house is on, so the meter is measuring only the electricity used by the space heater.

A basic electrical engineering equation called Ohm's law spells out how the three terms relate. Current is equal to the voltage divided by the resistance. It's written like this:

Let's say you have a tank of pressurized water connected to a hose that you're using to water the garden. If you increase the pressure in the tank, more water comes out of the hose, right? The same is true of an electrical system: Increasing the voltage will result in greater current flow.

Now say you increase the diameter of the hose and all of the tank's fittings. This adjustment would also make more water come out of the hose. This is like decreasing the resistance in an electrical system, which increases the current flow.

When you look at a normal incandescent light bulb, you can see this water analogy in action. The filament of a light bulb is an extremely thin wire. This thin wire resists the flow of electrons. You can calculate the resistance of the wire with the resistance equation.

Let's say you have a 120-watt light bulb plugged into a wall socket. The voltage is 120 volts, and a 120-watt bulb has 1 amp flowing through it. You can calculate the resistance of the filament by rearranging the equation:

So the resistance is 120 ohms.

Beyond these core electrical concepts, there is a practical distinction between the two varieties of current. Some current is direct, and some current is alternating -- and this is a very important distinction.