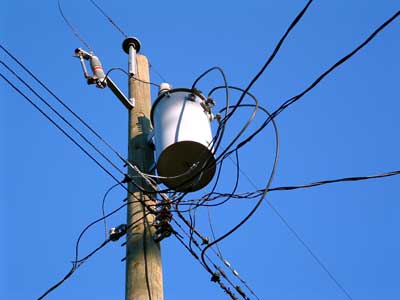 Power-distribution systems connect into the ground many times. Note the wire trailing down the side of the utility pole in this photo.
©iStockphoto.com/ Effinity Stock Photography

When the subject of electricity comes up, you will often hear about electrical grounding, or just ground. For example, an electrical generator will say, "Be sure to attach to an earth ground before using," or an appliance might warn, "Do not use without an appropriate ground."

It turns out that the power company uses the Earth as one of the wires in the power system. The planet is a good conductor, and it's huge, so it makes a handy return path for electrons. "Ground" in the power-distribution grid is literally the ground that's all around you when you are walking outside. It is the dirt, rocks, groundwater and so on.

If you look at a utility pole, you'll probably be able to spot a bare wire coming down the side of the pole. This connects the aerial ground wire directly to ground. Every utility pole on the planet has a bare wire like this. If you ever watch the power company install a new pole, you will see that the end of that bare wire is stapled in a coil to the base of the pole. That coil is in direct contact with the earth once the pole is installed, and is buried 6 to 10 feet (2 to 3 meters) underground. If you examine a pole carefully, you will see that the ground wire running between poles are attached to this direct connection to ground.

Similarly, near the power meter in your house or apartment there is a 6-foot (2-meter) long copper rod driven into the ground. The ground plugs and all the neutral plugs of every outlet in your house connect to this rod. Our article How Power Grids Work also talks about this.

Explore the links­ below to learn even more about electricity and its role in technology and the natural world.