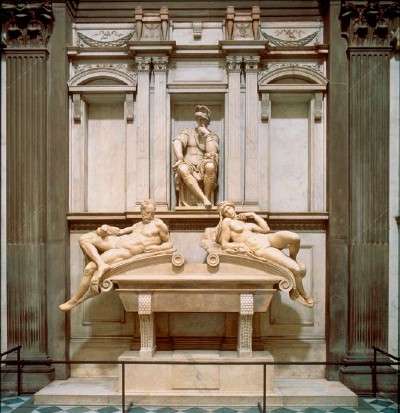 The tomb of Lorenzo de' Medici (20 feet 8 inches x 13 feet 9 inches) is a grand memory built in marble. It is housed within the Medici Chapel in San Lorenzo, Florence.

In the figures of the two dukes, Michelangelo took great care to confer to each man a distinctive character. In the tomb of Lorenzo de' Medici (1520-1534), Lorenzo is portrayed as dark and introspective, his posture closed and his face in shadow (Lorenzo statue is centered above the figures of Dusk and Dawn). He is dressed in dramatic Roman armor that at once adorns and enhances his muscular physiques. The two figures, together with the Times of Day, are a meditation on the passage of time and the vanity of worldly power.

While working on the Medici Chapel, Michelangelo also began another commission for the Medici family, the Laurentian Library. Go to the next page to learn more about this beautiful building.