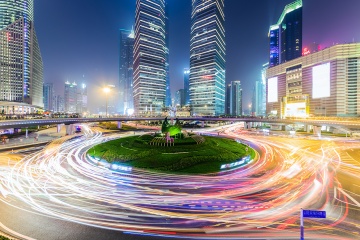 Roundabouts — you know, those circular intersections with the round median in the middle. The very word strikes fear into the hearts of driver-education instructors, elderly motorists and basically all Americans.

In all fairness, though, they are a little counterintuitive. As drivers approach a roundabout, they first yield to any traffic already in the intersection. Then, when all is clear, they proceed counterclockwise around the center island until exiting at their chosen street. So while turning right feels fairly natural, going straight requires drivers to swerve around the central island. And going left — well, going left requires a whimsical 270-degree journey around the circle that might be fun were you not worried about darting cyclists, dark-clothed pedestrians and distracted drivers to whom a yield sign is but a mere suggestion.

Nevertheless, there are actually a lot of things to love about roundabouts. In many cases, they're safer, more efficient, more environmentally friendly, more aesthetically pleasing, and less expensive than traditional intersections controlled by traffic lights or stop signs. Perhaps that's why places like Europe and Australia have enthusiastically embraced roundabouts for more than 50 years.

Americans, on the other hand, have resisted. But this distaste for roundabouts may have more to do with drivers than the design of the intersection. That's not to say that Americans are bad drivers. No, it's just that there was that one time they drove to Florida, and they drove through five of them in heavy traffic, and it was terrifying. In other words, they're still warming up to a traffic feature that's only been a part of the country's roads since 1990 and has still failed to catch on in many states.

So, as you approach our article on roundabouts, yield to our take on their history, benefits and design, and we're confident you'll be ready to proceed — counterclockwise — into a newfound love of roundabouts.