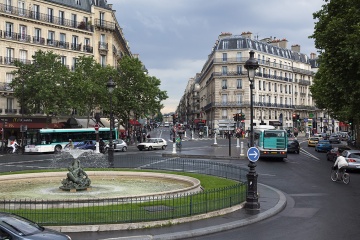 While roundabouts may have more fans in Europe, they're actually rooted in the United States. The basic shape goes all the way back to the 1790s, when architect and engineer Pierre L'Enfant proposed a number of circular intersections in Washington, D.C.'s street layout, including the famous Dupont Circle [source: Waddell]. American businessman William Eno revived the form in 1905 for New York City's Columbus Circle, widely considered the country's first circular intersection designed for the automobile era [source: FHWA, "Roundabouts: An Informational Guide"].

Like modern roundabouts, these junctures feature one-way traffic moving around a central hub and connecting roads branching out like spokes on a wagon wheel. But the central circle is much larger, and connecting roads enter at abrupt right angles, requiring drivers to significantly slow or stop before entering the intersection. They're what engineers call traffic circles.

In the 1930s American road departments began building rotaries, the next step in roundabout evolution. Like modern roundabouts, these intersections featured connecting roads that entered at a more gradual angle, allowing traffic to merge into the central circle at a higher rate of speed. Engineers also employed triangular islands, or splitter islands, to separate entering and exiting lanes [source: Waddell]. But there was one big difference: Vehicles within the central circle had to yield to those entering the intersection. Engineers figured as long as they gave cars plenty of room to change lanes between an entry and the next exit, traffic would flow smoothly. Not only did this design lead to huge rotaries, it also caused congestion and high crash rates, causing the design to fall out of favor in the United States by the mid-1950s [source: FHWA, "Roundabouts: An Informational Guide" and Waddell].

Then came the British to the roundabout rescue. In 1966 they experimented with a rule that required vehicles entering a circular intersection to yield to those already in it. Capacity increased by 10 percent, and delays and crashes both decreased by 40 percent. It was a huge success, and the country soon implemented the rule nationwide. The modern roundabout was born [source: Waddell].

Over the next few decades, the British concept spread throughout the world, though some countries proved more skeptical than others. The United States, which had actively removed many of their old rotaries, was particularly resistant: A proposed three-leg roundabout in Ojai, California, would have been the country's first had it not been scrapped due to public outcry in 1988. It would be another two years before the United States got its first modern roundabout, when engineers constructed two in the planned community of Summerlin, Nevada [source: Waddell]. Despite some persistent American skepticism, the concept continued to gain traction, and by 2014 the country boasted 10,341 roundabouts [source: Metcalfe].