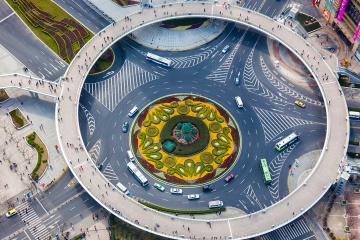 The more roundabouts that are built in the United States, the more popular they become. Why? Because people can see the benefits of a safer, less congested, lower cost, more attractive and more environmentally friendly intersection. A survey conducted in 2001 questioned drivers in three communities before and after roundabouts were built. Those favoring the new intersection jumped from 31 percent before construction to 63 percent after [source: Insurance Institute for Highway Safety].

Roundabouts are safer than traditional intersections for one big reason: Fewer conflict points. Think about how many places traffic can cross paths at a signaled intersection. There are a lot — 32 to be exact. In a roundabout there are only eight such places, greatly reducing the potential for collisions [source: Nevada Department of Transportation, "Roundabout Benefits"]. What's more, their design, with one-way traffic and angled entry lanes, reduces the chance of dangerous T-bone or head-on collisions to zero. Roundabouts also have a slowing effect, forcing drivers to brake as they navigate around the central island and eliminating the impulse to speed up and beat a traffic light [source: Washington State Department of Transportation, "Roundabout Benefits"].

All these features can produce dramatic safety improvements. A 2000 study that looked at 24 newly constructed roundabouts across the United States revealed a 76 percent decrease in injury crashes, a 90 percent decrease in fatal or incapacitating crashes and a 39 percent reduction in overall crashes [source: FHWA, "Roundabouts"].

Pennywise city budgeters will also find a lot to love in roundabouts. While the cost to construct a roundabout is similar to that of a signaled intersection, the cost to maintain the circular intersection is much lower. Traffic lights cost about $5,000 to $10,000 in yearly maintenance and have a lifespan of 15 to 20 years. Compare that to a roundabout, which lasts about 25 years and has none of the hardware, maintenance and electrical costs of signals [sources: WSDOT, "Roundabout Benefits" and NDOT, "Roundabout Benefits"].

Of course, safety and cost savings are great and all, but it's the reduction in traffic congestion that gets the public most excited about roundabouts. With no stop signs or traffic lights to halt traffic, roundabouts promote a continuous flow of vehicles that can really reduce delays — anywhere from 13 to 90 percent depending on the intersection [sources: WSDOT, "Roundabout Benefits" and NDOT, "Roundabout Benefits"]. That's good news for Earth, too: Improved vehicular flow reduces fuel consumption and greenhouse gas emissions by 30 percent or more in some cases [source: NDOT, "Roundabout Benefits"]. And even if you did get delayed in a roundabout, at least you could admire the landscaping on the central island, an aesthetic improvement over the unbroken concrete in a traditional intersection.

One Size Doesn't Fit All

Just because roundabouts are replacing traditional intersections doesn't mean they're better in all circumstances. When determining where to put a roundabout, engineers consider factors like topography, accident history, current and projected traffic delays, types of vehicles using the intersection, and cost in terms of accidents, right-of-way purchase and maintenance [source: WSDOT].