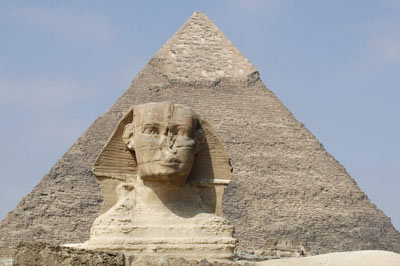 Let's say that you want to create a theme park called Egypt World, complete with an authentic reconstruction of the Egypt's Great Pyramid as the centerpiece for your park. What would you have to do,­ and would modern technology make the project any easier?

If you wanted to be completely authentic about it, you would do the whole project with people-power. It's believed the great pyramid was built with the labor of 5,000, 20,000 or 100,000 people (depending on which expert is doing the estimate) over the course of 20 years or so. No matter how you slice it, that's a lot of person-years of effort. Even if you paid your workers minimum wage, just the labor of the project would cost billions of dollars.

The Great Pyramid is also amazing from a materials standpoint. The pyramid measures 756 by 756 feet at the base and is 481 feet tall. It is made up of more than 2 million blocks weighing on the order of 3 tons each. To build it out of blocks, you would have to find a quarry containing that much stone, cut the stone out of the quarry, load it onto a truck or a train, haul it to the site, unload it, lift it and so on. Working with stone blocks is definitely going to be a major pain. It's certainly doable, but it's a pain nonetheless.

There must be an easier way. Luckily, using today's technology, there is. To do it the modern way, you would definitely go with concrete. It would be something like building the Hoover dam, which has about as much concrete in it as the Great Pyramid has stone. With concrete, you can mold the shape you want and pour.

How much would it cost? 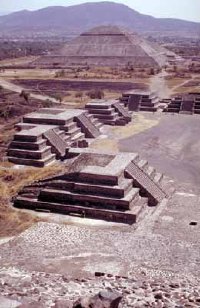 To build this today, you would need hundreds of millions of dollars.

The Hoover dam required more than 3 million cubic yards of concrete. Because of the setting time for concrete and the amount of heat it generates during the setting process, the dam was poured in sections approximately 50 by 50 feet on a side and 5 feet deep. Workers embedded cooling pipes in the concrete as they poured it, and cold water ran through these pipes to help remove the heat during setting. A 5-foot-deep block would set for 36 to 72 hours before another block was poured on top of it. Using this technique, they poured the entire Hoover dam in less than two years.

This same technique would work great for recreating the Great Pyramid. The Great Pyramid is even a little smaller than the Hoover Dam -- only about 2.5 million cubic yards of concrete is needed. But this is still going to be an expensive project. If you're buying it by the truckload, concrete costs about $80 per square yard. For a big job like this, you would build your own concrete plant. Let's say that by doing so you get the cost down to $50 per square yard. That means concrete alone will cost $125 million. By the time you add in labor, design costs, form work and so on, you probably end up doubling that. So your new Great Pyramid might cost something on the order of $250 million to $300 million.