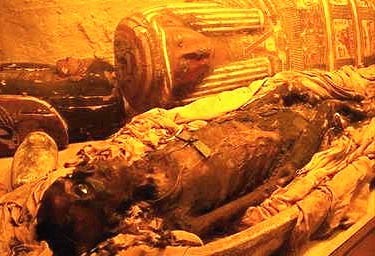 Along with Dracula, Frankenstein's Monster and the Wolfman, the mummy is one of the great figures of the classic horror-movie genre. And it's easy to see why: In a sense, mummies are real-life, tangible ghosts. They are bodies that stick around long after death.

­The most familiar mummies, of course, are the carefully wrapped bodies of ancient Egypt. These figures are only one subsection of the world's mummy population, however. In the past 200 years, scientists, adventurers and capitalists have discov­ered ancient mummies in diverse locales all around the world.

In this article, we'll meet some of these mummies to see how and why they were so carefully preserved. We'll also look at some natural mummies and examine how the world's mummies help us understand human history.

What is a mummy?

A mummy is simply a human being whose soft tissue has been preserved long after death. Ordinarily, when a person dies, the decomposition process reduces the body to a bare skeleton in a matter of months. The rate of decomposition is dependent on a number of factors, chiefly the nature of the surrounding environment.

In most environments, the first stages of decomposition begin within a few hours. In this initial stage, called autolysis, organs that contain digestive enzymes (the intestines, for example) begin to digest themselves.

Autolysis is followed by putrefaction, the breakdown of organic matter by bacteria. In normal, temperate circumstances, putrefaction gets going about three days after death. Within a few months, the body is reduced to a skeleton. In hotter, more humid environments, this process is accelerated, because bacteria reproduce rapidly in such conditions. In colder, drier conditions, the process is slowed, because bacteria need heat and water to thrive (this is why we use refrigerators to preserve food). If the conditions are cold or dry enough, or if there isn't enough oxygen, the environment is so harsh that few bacteria can survive. In this case, the body will not fully decompose, possibly for thousands of years.

There are many circumstances that can lead to such a mummy. In nature, bodies have been preserved in the frozen ice of glaciers, the oxygen-depleted depths of peat bogs and the arid ground of the desert. The "Iceman" discovered in 1991 by tourists in the Italian Alps is one of the most amazing natural mummies. The 5,300-year-old corpse, found with perfectly preserved tools, died in a rocky hollow that quickly filled up with snow. Essentially, this created a natural freezer that preserved the body's tissues. This mummy has provided historians with a great deal of information about Europe's Copper Age, including representative technology, human health and tattooing practices.

In some cases, natural mummies have significantly altered our conception of history. Mummies found in China's Taklimakan Desert have provided several clues to the lineage of modern natives of this region. The structure of the mummies' faces shows they were of Indo-European descent. One man, who lived around 1000 B.C., has a distinctive sunray tattoo on his temple, similar to an ancient symbol for an Indo-Iranian god. This, along with other evidence preserved with the mummies, indicates that the region was settled by Indo-European traders, centuries before the Han Chinese arrived in the area. ­These mummies were created by the hot sand surrounding them in their graves. When bodies are buried in hot sand, without any protective structure, the sand can absorb the body's fluids, completely desiccating it. This natural mummification process also occurred in the oldest Egyptian graves. When a body was buried in the Egyptian desert, the internal organs were preserved and the skin was crisped to a dark, hard shell. This phenomenon had a profound effect on the ancient Egyptians: The idea that the human body could survive long past death indicated to them that the human spirit could too. In the next section, we'll see how these early natural mummies led to the Egyptians' infamous artificial mummification process.