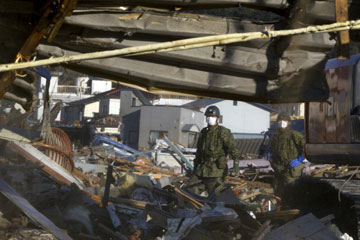 Have you ever assured someone that your friend is reliable by saying that he or she "has both feet on the ground"? The fact that such a phrase exists shows how much comfort we take in the idea that the ground beneath our feet is unmoving, unchanging and dependable. Indeed, much of our civilization, from our houses and buildings to our energy, food and water sources, depends on unmoving earth.

In truth, however, our planet's seemingly stable surface is made up of enormous pieces of rock that are slowly but constantly moving. Those pieces continually collide with and rub against one another, and sometimes their edges abruptly crack or slip and suddenly release huge amounts of pent-up energy. These unsettling events are called earthquakes, and small ones happen across the planet every day, without people even noticing. But every so often, a big earthquake occurs, and when that happens, the pulses of energy it releases, called seismic waves, can wreak almost unfathomable destruction and kill and injure many thousands of people [source: Bolt].

That sort of cataclysm occurred on March 11, 2011, in Japan, when a massive quake, later estimated by Japanese Meteorological Agency to be 9.0 in magnitude, struck 81 miles (130 kilometers) east of the city of Sendai on the nation's northeastern coast. The forces of the quake, the fifth most powerful in the past century, set off a giant wave, called a tsunami, that engulfed villages, destroyed buildings and drowned and crushed people who lived there [source: Green]. The earthquake and tsunami also badly damaged a six-reactor nuclear power plant in Fukushima, 150 miles (241 kilometers) north of Tokyo, destroying the backup generators that powered its cooling systems and causing a dangerous release of radiation that forced people in the region to flee. In all, the quake claimed the lives of 20,896 people, according to the U.S. Geological Survey.

Though earthquakes have terrorized people since ancient times, it's only been in the past 100 years that scientists have come to understand what causes them, and to develop technology to detect their origin and measure their magnitude. In addition, engineers and architects have worked to make buildings more resistant to earthquake shocks. Someday, researchers hope to find a way to predict earthquakes in advance, and perhaps even control them.

In this article, we'll give you the latest scientific knowledge about earthquakes, and discuss how humans can cope with them. But first, here are some basic earthquake facts.