What grade of steel was used in the World Trade Center? 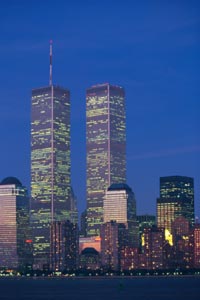 The twin towers as they once stood against the night sky. See more skyline pictures.
Comstock/Thinkstock

As you might imagine would be the case in a complex as large as the original World Trade Center, multiple different grades of steel were used in construction -- 12, in fact. These grades began at a very common type of steel known as A36, which has a yield strength of 36ksi (or kilopounds per square inch), and got progressively stronger -- all the way up to steels that had yield strengths of 100ksi [source: FEMA].

The yield strength assigned to any grade of steel is the point at which it will bend and not regain its original shape. So A36 steel -- a mix of carbon and iron, like all steels -- can handle 36,000 pounds per square inch (36 kilopounds) of pressure before it begins to deform.

In the external walls of towers one and two of the World Trade Center, the steel also varied by thickness to allow for different pressure loads at different levels. In the lower levels, the thickness was most frequently around 4 inches (10 centimeters), while at higher floors, it could be as thin as 0.25 inch (0.64 centimeter) [source: FEMA].

In the construction of the floors themselves, a mix of A36 and ASTM A 242 steel was used. ASTM A 242 is what is known as a high-strength, low-alloy (HSLA) steel, which means that it was extra-strong, allowing less of it to be used which makes for a lighter building.

Overall, 200,000 tons (181,436 metric tons) of steel were used to build what were, at the time of their construction, the largest buildings on Earth [source: Ross].

One of the most consistently used facts by 9/11 conspiracy theorists is that the grade of steel used in the World Trade Center simply couldn't melt at the temperatures fires created when jetliners slammed into the structures. And they're right.

Even though the girders that comprised the twin towers wouldn't turn to molten steel in the jet fuel fire, they would certainly have weakened in the heat. In fact, one estimate says that they would have lost half of their strength at 1,100 degrees Fahrenheit (593.3 Celsius) [source: Popular Mechanics]. It's important to also note that other items would have caught on fire in the buildings in addition to the jet fuel, and could have contributed to higher burning temperatures.

But according to a multi-year study carried out by the National Institute of Standards and Technology (NIST) even these fires combined with the impact of the planes would not have been enough to bring the buildings down. Their report concluded that the real culprit was the fact that fireproofing materials were dislodged during the impact and this in turn exposed vital structural components to the heat. As these components lost strength, the floors began to sag, pulling the weakened columns inward and leading to a chain reaction that had floor collapsing upon floor until the buildings no longer stood [source: NIST].

When Will U.S. Subway Design Catch Up With the Rest of the World?
How Steam Technology Works
How Biomechatronics Works