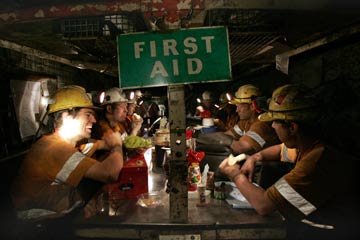 In 2010, people everywhere were riveted to the story of the 33 miners in Chile trapped 2,300 feet (700 meters) underground in a copper and gold mine. The miners spent more than two months there, getting food, air and letters from loved ones through bore hills drilled to their location in a protected workroom. Meanwhile, the larger-scale drilling of an escape shaft made slow progress. Finally, on Day 69, rescuers lifted each of the miners out alive [source: Boston].

The saga reminded the non-mining world of a usually invisible truth. Deep beneath the surface of the Earth lie some of the most frightening factories in the world: underground mines.

Underground mines are the alternative to surface mines. Surface mines excavate from the top down, a method that can become inefficient at depths greater than about 200 feet (60 meters) [sources: Illinois Coal Association, De Beers]. Undergrounds coal mines can drive 2,500 feet (750 meters) into the Earth and other types even deeper -- uranium mines can reach 6,500 feet, or 2 kilometers. But those depths are extreme; most top (or bottom) out at about 1,000 feet (300 meters) [sources: Times Wire, ARMZ, Illinois Coal Association].

Mining has changed a lot from the images we have of the 19th century when men with shovels toted canaries to make sure the air underground was not toxic. Modern mines feature extensive ventilation and water-drainage systems, high-tech communication networks and increasingly computerized machines that reduce the number of humans required underground.

All underground mines have some crucial components in common: ventilation shafts to clear toxic fumes from drilling and blasting; escape routes; access shafts to lower workers and equipment; ore-transport tunnels; recovery shafts to carry excavated ore to the surface; and communication systems to send information back and forth between the surface and the depths [source: Hamrin].

No two mines are alike, though. Technology applications and basic decisions about design and mining method rest on considerations like the type of ore being mined, composition of surrounding rock, shape and orientation of the ore deposit, geologic features underground, and simple economics [source: United Mine Workers of America].

And, very early in the process, the determination of hard or soft.

Even within the hard-rock category, design and extraction methods vary, but almost all revolve around a few basic techniques:

Room and Pillar – For relatively flat ore deposits, with little change in elevation throughout, miners drill an access ramp to the deposit and remove ore in a pattern of holes (rooms) and roof supports (pillars). The rooms can be mined out using conventional charge-and-blast techniques or, more commonly now, with a machine called a continuous miner. The continuous miner drills into the rock until it forms an excavated room, perhaps 20 to 30 feet (6 to 9 meters), leaving in place a rock pillar to support the "roof" [source: United Mine Workers of America]. The machine moves through the ore, creating rooms and pillars, until the full deposit is covered. A final pass drills through the pillars to recover the ore there, allowing the roofs to collapse behind the machine as it leaves each room.

Cut and Fill – For relatively narrow ore deposits, miners drill an access ramp adjacent to the ore deposit, from the surface down to the lowest point of the deposit. An operator then drives a drill through the ore, creating a drift, or a horizontal cut, from one side of the deposit to the other. In the hardest rock, no roof-support is needed; in softer rock, bolts may be placed in the roof as the drill progresses [source: Mining Know-How]. Once the drift is complete, backfill, or waste material, is spread into the open drift, creating a platform for the next pass. The drill drives on top of this backfill to cut another drift through the ore. This continues until the drill cuts a drift across the top of the ore deposit.

Cut and fill is for hard rock, as it doesn't feature the support mechanisms inherent in and central to a method like room and pillar. The room-and-pillar approach, on the other hand, crosses easily into the softer stuff – and most coal mines.

The least common method in hard-rock mining, block caving, is typically saved for low-grade ore. It involves drilling a section of ore at the very bottom of the deposit and then blasting to make the roof collapse. Gravity then takes over, as the ore above the blast site fractures and collapses in succession as support is withdrawn. The collapsed ore is hauled out the mine for processing [source: Great Mining]. 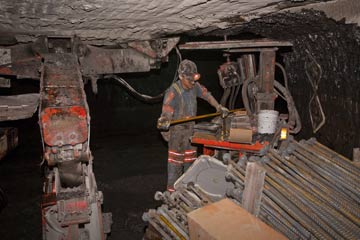 Longwall mining is extraordinarily efficient. Rather than drilling through the ore deposit, a longwall machine cuts across it, shaving off slices up to 600 feet (182 meters) long. Those slices drop directly onto a continuously moving conveyor, which carries it to a haulage shaft that lifts it out of the mine. In longwall mining, the roof supports are built into the machine, sitting between the top of the longwall miner and the roof of the room. As the machine progresses into the ore, the supports move with it, allowing the area behind it to collapse and fill in the excavated area.

The longwall method can recover up to 90 percent of the available ore. The room-and-pillar approach typically recovers about 50 percent [source: Illinois Coal Association].

When the ore deposit in relatively narrow, shorter cuts are made. This variation is called shortwall mining.

The old-school technique of blast mining, that uses explosives like TNT to break up ore, is still in use, but just barely – less than 5 percent of U.S. production [source: Great Mining].

Underground mining, then, is becoming increasingly efficient. It requires less human labor, which puts fewer miners in danger as they work deep beneath the surface. Still, underground mines are not the safest places to be. 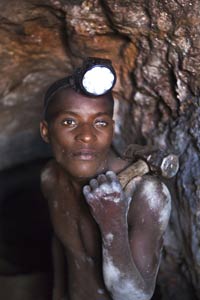 While mining has become much safer in developed countries, it is still very risky in parts of the third world. In Congo, Nsinku Zihindula works 24 hour shifts hammering at solid rock to find cassiterite ore. He was blinded in his left eye by flying rock.
Tom Stoddart/Getty Images

The environmental toll of underground mining is significant. It includes air pollution, changes in water-flow patterns, chemical and gas seepage into water supplies and soil, inaccessible fires in abandoned mines, and dramatic changes in land composition that can make the area unusable after the mining operation is done [source: Saxena].

Then there is the human toll. Most mining accidents gain little media attention, especially those involving few casualties or taking place in developing nations. In 2010, almost 2,500 Chinese miners died on the job, none of those attributed to "major accidents" [source: Macia].

That year was a terrible one for mining in general. In the United States, a mining catastrophe in West Virginia left 29 dead, the same number that died in an accident in New Zealand. In Chile, 33 miners were rescued in the dramatic incident recounted earlier, but another 45 died in other accidents that same year [source: Macia].

Many accidents occur when the mine props collapse due to earth tremors. Explosions, too, trigger casualties when ventilation systems fail to effectively remove exhaust from mining equipment, coal dust and natural underground gas leaks. Blasting can ignite those gases, leading to deaths from both the explosions themselves and the subsequent collapse of mine structures; a methane-gas explosion killed those 29 miners in West Virginia [source: Macia].

Most countries now have laws and regulations designed to address safety and environmental issues. Some require the mining company to return the mined area close to its original state. Others require mines to be inspected regularly to ensure they are safe. And new mining techniques have also decreased the death toll. In the U.S., the mining industry saw thousands of deaths from accidents each year in the early 1900s. This dropped to about a hundred per year in the 1990s, and just 35 in 2012 [source: Mine Safety and Health Administration]. China had 7,000 mining deaths in 2002 but 2,500 in 2010 [source: Macia].

While safety has definitely increased in developed countries, it still has a long way to go in some developing countries. But we may see a day when underground mines aren't some of the most frightening factories on Earth. Anywhere.

It's important to know that many of the safety improvements I noted as improving "modern mines" apply mostly to first-world mining. China's death rates, which have dropped significantly in recent years, remain in the thousands – well above the double-digits reported in most Western and developed countries. On the socioeconomic front, I gathered from my research a few things: that serious safety requires serious funding, and many developing nations just don't have it; that concern for mine-safety seems to be proportionally related to concern for human rights; and that even those Australian underground miners earning six-digit salaries aren't making enough.