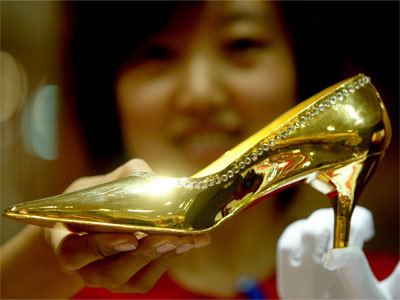 Forget those ruby red slippers, Dorothy. This gold shoe, made in China and yours for the low price of $41,000, will take you a lot farther than Kansas.
Zhang Wenkui/ChinaFotoPress/­Getty Images

­Nothing has captured the imagination of humans like gold. Egyptians considered the bright yellow metal to be divine and indestructible, a physical manifestation of the sun itself.

The Egyptian word for gold is nub, which survives in the name Nubia, an ancient region in northeast Africa that became a major supplier of the precious metal. Aztecs used the word teocuitlatl -- "excrement of the gods" -- to describe gold. And on the periodic table, gold is represented by the symbol Au, from the Latin aurum, which means "shining dawn." By any name, gold has always been associated with wealth and power.

Greed for gold fueled Spanish colonization of the Americas. And the gold rushes of the 19th century, both in California and Australia, triggered a hunger for gold that has hardly been satiated today.

­You might think that the constant searching, digging and panning would have yielded enough gold to line every road in Oz, but you'd be wrong. In all of history, only 161,000 tons (146,057 metric tons) of gold have been mined [source: National Geographic]. Compare that to the 5.6 million tons (5.1 million metric tons) of aluminum produced by the United States -- in a single year [source: International Aluminum Institute].

The rarity of gold, however, is just one reason why people value the metal. Its unique physical and chemical properties also make it useful. A one-ounce piece of gold can be hammered into a sheet five-millionths of an inch thick or drawn out into 50 miles (80 kilometers) of wire [source: Temescu]. And it's chemically inert, which means it won't react easily with other chemicals.

Of course, as Shakespeare once said, "All that glitters is not gold." The shiny wedding band on a bride's finger has its dark underbelly. Gold mining is bad for the environment, producing more waste per ounce than any other metal. More troubling, it's dangerous for the low-wage workers employed around the world to pry the metal from the Earth. Hundreds of miners are killed each year by rockfalls and explosions. Hundreds more are buried alive underground.

Understanding all of these issues is critical to understanding how gold works. On the next few pages, we'll study element number 79 on the periodic table and try to to understand the power it holds over our imaginations. Let's start by considering gold's long history, a journey that will take us from the dawn of civilization to the great gold rushes of the late 19th century.