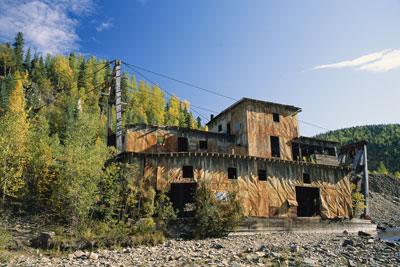 Some abandoned mines, like this former gold mine, built in 1934 in Alaska, are left with buildings intact. See more Alaska pictures.
Rich Reid/National Geographic/Getty Images

What's the worst thing that could happen to you on a hiking trip? You trip over a rock and twist your ankle? You run into a grizzly bear? Or your friend falls into an abandoned vertical mine shaft? It may sound unbelievable, but about 30 people die each year in the United States from accidents involving abandoned mine operations [source: Geology]. These incidents are pretty devastating -- in 2006, a teenager visiting an abandoned mine fell 1,000 feet to his death during an attempt to jump over an exposed 10-foot-wide shaft [source: AP].

Throughout the world there are veritable fields of dangerous, exposed holes from mining operations that were simply abandoned after they stopped yielding minerals or coal. There are an estimated 100,000 to 500,000 abandoned mine sites in just the Western United States; the Bureau of Land Management (BLM) has identified and located 12,204 of those as of April 2008 [source: BLM].

Startlingly, many of those abandoned mines yet to be identified aren’t on any map. And in some cases, there are no warning signs of the danger posed by the abandoned operations. Some of these mines were simply left to fall into disrepair and neglect. This is where that possibility of falling into a mine shaft on your hiking trip comes in.

What's more, abandoned mines could pose a danger to people who don’t even venture forth into the great outdoors. Mine tailings -- the remnants of materials left behind after the desired mineral is extracted -- are often simply piled on-site while a mine is in operation and left behind when the mine is abandoned. These tailings are often toxic, and when rain runs off the piles, it leaches out harmful toxins like lead, mercury and arsenic and caries them into nearby wetlands, threatening wildlife and exposing humans' drinking supplies to risk.

So who's responsible for cleaning up these mine sites, considering they pose such danger? Find out about programs created to address the problem of abandoned mines on the next page. 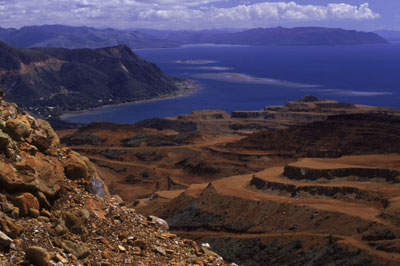 It looks inviting, but this abandoned mine in New Caledonia, in the South Pacific, may be hazardous to your health.
Peter Essick/Aurora/Getty Images

Unfortunately, most mines remain abandoned waste sites. Cleaning up an old mine can be costly. Congressional testimony in 2006 concluded that it would take nearly $72 billion to clean up just the abandoned hardrock mines in the United States [source: Earthworks]. (These are mines that produce heavy minerals like silver, gold, uranium and other metals, located largely in the Western U.S.) Faced with such an expense, many mining companies found that it's cheaper to simply abandon their mines. As time passed, land leases lapsed, records were lost and the original ownership of the mines became unclear. In short, no one was held accountable for the waste sites.

Old mines pose two types of hazards: physical (like that mine shaft your friend fell into on the last page) and environmental (like the piles of tailings that leach toxins into water supplies). To fully remediate -- remove hazards from -- an abandoned mine site, both problems have to be addressed.

Physical hazards like mine shafts and vertical entries (called adits, which some intrepid explorers find irresistibly appealing) have to be covered with heavy metal slabs. Some covers include openings that allow bats in and out of the mine. Old equipment left to rust on the site has to be disassembled and carried off.

Addressing the environmental risks of mine sites is a bit trickier. In the U.S., stiff penalties are levied against anyone who violates the Clean Water Act. This includes people and governments that undertake abandoned mine cleanup, in which they may accidentally introduce toxins into water bodies while removing mine tailings from a site. In 2006, legislation was proposed to exempt people from prosecution who wanted to clean up abandoned mine sites, so long as they weren’t affiliated with the mine’s creation or operation [source: Salazar]. The legislation didn’t pass.

In an effort to help remediate abandoned mines on government-owned lands, the Bureau of Land Management (BLM) created the Abandoned Mine Lands (AML) program. The BLM cleans up contaminated sites and sequesters tailings that can’t be safely moved. Between 2000 and 2008, the BLM cleaned up and secured more than 3,000 abandoned mines [source: BLM].

But why not hold the mining companies responsible for their messes? The U.S. government already thought of that, mandating an Environmental Protection Agency (EPA) superfund -- a coffer that mining companies pay into to cover costs associated with future cleanup. However, the fees don’t usually fully cover the costs -- leaving taxpayers to make up the difference [source: Earthjustice]. And there’s a loophole in the federal law that releases bankrupt mining corporations from responsibility of cleanup costs.

Some mine owners run responsible operations. In 1986, the Department of the Interior created an award for excellence in reclaiming land following coal surface mining. Since then, operators have become more creative with their businesses. Many clean up their sites as they operate, while some landscape former sites and even redevelop mining factory buildings into commercial spaces, like lofts and retail stores [source: Harvard].

Based on the success of these projects, a new step in addressing abandoned mines has been added -- reclamation. After the physical and environmental hazards are removed, the land is reclaimed. Vegetation is introduced again, and old buildings may be preserved. This process allows the area to return to its natural state.

For more information on mining and other related topics, visit the next page.