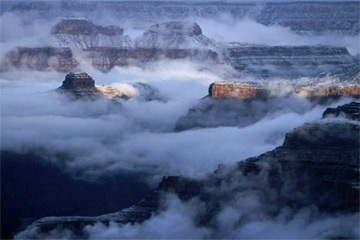 The Grand Canyon is gorgeous. It's also home to a whole lot of uranium, much of which is off-limits for at least 20 years, thanks to a U.S. ban enacted in 2012. See more nuclear power pictures.
Christer Fredriksson/Lonely Planet Images/Getty Images

Mining towns draw monikers from it. Political leaders keep close tabs on it. Others flat out disparage it.

For years, the element has been tied to talk of nuclear weapons and the birth of the atomic age. Today, however, the metal has taken on a different role -- in the form of energy. In fact, much of the enriched uranium stored in nuclear weapons from the arms race has been rededicated to fueling the world's nuclear power reactors, which provided the world with almost 14 percent of its electricity in 2010 [source: Nuclear Energy Institute].

And it's extremely powerful, too. One 7-gram pellet of uranium fuel produces as much energy as 3.5 barrels of oil and 807 kilograms (1,779 pounds) of coal [source: Newfoundland Labrador DNR].

Beyond lighting up homes and businesses through nuclear power, uranium makes radioisotopes that produce radiation, which can help diagnose and treat certain medical conditions. It's also used for shielding and, in its depleted form, as counterweights for aircraft, too.

But where does uranium come from and how is it gathered?

Like other metals, uranium occurs naturally in rocks on the Earth's surface and can be extracted through uranium mining. Miners originally discovered uranium alongside radium, another element that was used as glowing, decorative paint (at least until people realized its harmful, radioactive effects). Uranium hit the market as a decorative glaze before its nuclear properties were discovered.

This heavy metal comes in several isotopes, or forms of the element with different numbers of neutrons. Depending on the stability of an isotope, some can be more radioactive (likely to give off energetic particles) and fissile (likely to produce nuclear fission) than others. Uranium-238 measures as the most abundant isotope of the element on Earth and can be found in rocks and seawater. But it's not as radioactive as uranium-235, the best-known form of uranium used to create nuclear reactions.

In this article, we'll chart the uranium mining process, tracking the element as it transitions from ore to fuel pellets ready to be used by nuclear reactors. We'll also look at the wax and wane of uranium mining, as well as the risks for humans and the environment by following the contentious debate over mining uranium in the backyard of the U.S.'s most iconic canyon.

Dust off your doomsday clock as we revisit the origins of uranium mining and all things nuclear on the next page.