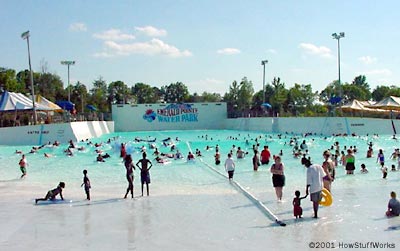 One of mankind's oddest re-creations of nature is the artificial ocean shore, also known as the wave pool. These popular water park attractions are sanitized, regimented revisions of the wild, organic surfs created by nature. In wave pools, the water is chlorinated, the beach is concrete and the waves arrive like clockwork, once every few minutes.

In this article, we'll peek behind the scenes of Thunder Bay, the main attraction at Wet 'n Wild Emerald Pointe in Greensboro, NC. As we'll see, it take­s a lot of sophisticated, powerful equipment to keep the waves rolling all day long. But the basic idea is very simple. 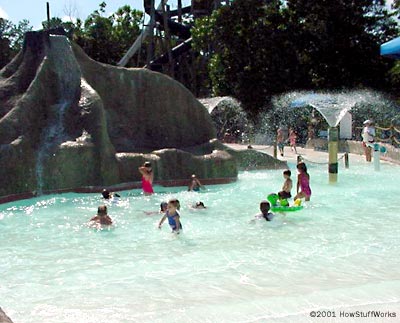 There are a number of ways to replicate this type of wave action. All you need is a basin of water and some means of creating a periodic disturbance. You could use a strong blast of air along the surface, a rotating paddle wheel (like the ones used on steamboats) or an oscillating plunger. Basically, you push on the water at one point and this energy travels outward, through the surrounding water. This is the same thing that happens when you drop a rock into a pond.

Emerald Pointe features a wave pool of this sort at Splash Island, a swimming area for younger kids. In this pool, gentle ripples spread out from the deeper end, just under a volcano structure, and wash up on the small beach.

Let's take a look at the machinery that makes this happen. 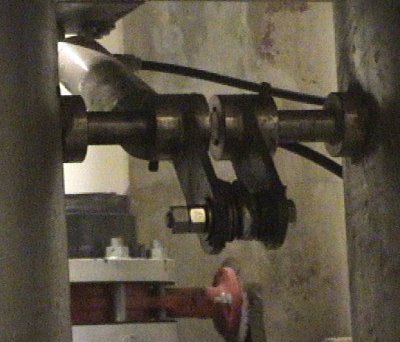 The machinery that creates the ripple effect within the wave pool at Emerald Pointe is very simple. In a pump room below the pool, a high-speed fan blows air into a wide metal pipe, which leads to an exhaust port at the base of the volcano. In the middle of this pipe, there is a butterfly valve, a wide disc with a swiveling metal axis rod. When the rod is swiveled one way, the disc rests horizontally in the pipe, blocking the air flow. When the rod is swiveled the other way, the disc moves to a vertical position so the air can pass.

A hydraulic piston swivels the rod back and forth at regular intervals, allowing short bursts of pressurized air to flow up to the exhaust port. These air blasts blow on the water at the base of the volcano, generating the flowing ripples.

Making small waves is fairly simple with this sort of system, but it's a lot harder to form large, surfable waves. You would need an absurdly intense blast of air or a large, awfully strong plunger. Such devices would likely be inefficient, cumbersome and dangerous, so they wouldn't make for particularly good water park attractions. Instead, water parks use water-pumping wave systems. In the next couple of sections, we'll see how this sort of wave pool works. 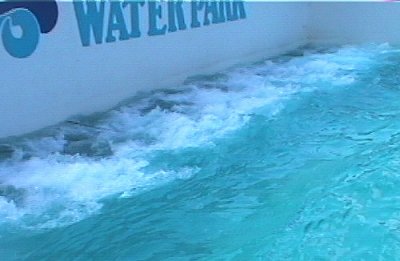 In the last section, we looked at an extremely simple wave pool. In this design, short bursts of pressurized air apply force to a relatively stable pool of water. This creates little waves, which extend outward along the surface of the water.

A larger wave pool system works differently. Instead of pushing on the water with air or a paddle, the wave machine dumps a huge volume of water into the deep end of the pool. The surge in water travels all the way to beach; the water level in the pool balances out again. Since water is fairly heavy, it pushes very hard to find its own level. If you dump more water in, you increase the size and strength of the wave.

There is a lot of powerful equipment involved in this process, but the idea is pretty simple. The wave pool has five basic parts: 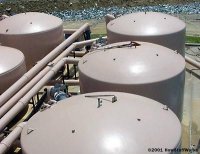 Robert Bochenski, the maintenance manager at Emerald Pointe, compares the "Thunder Bay" type of wave pool to a giant toilet. The pump system draws water from the return canal into the collection reservoir in the same way that a toilet draws water from the water line into its tank. When the water level in the reservoir is high enough, the system opens up the release valves at the bottom of the reservoir. This is like flushing a toilet: It dumps all of the collected water into the pool, creating the wave.

There are any number of ways to configure the wave-generating system in this setup. In the next section, we'll look at the specific machinery used at Emerald Pointe's Thunder Bay.

On a busy day, thousands and thousands of people will take a dip in the Thunder Bay wave pool, and even the cleanest among them leave a certain amount of dirt and oil behind. To keep the water sanitary, Emerald Pointe keeps a filtering system going 24 hours a day.

The Thunder Bay wave pool uses six massive filters, located just behind the wave generator. A powerful pump sucks water in from the canal, sends it through the filter system and shoots clean water back out. The collected dirty water is pumped to the city sewer line almost a mile away.

Let it All Out 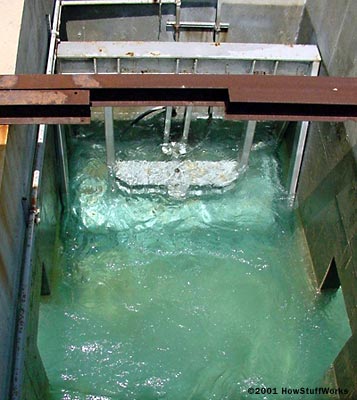 One of the release valves at Thunder Bay.

The water reservoir is broken up into eight connected chambers, each with its own release valve. The release valve has three major elements:

Since the metal struts pivot freely on the stationary steel beam, you can swing the valve plate back and forth. The plate is fairly heavy, so it naturally will swing over the valve seat. This plugs up the reservoir so water can't escape. (A rubber gasket around the valve seat keeps the valve from leaking too much.)

When pressurized oil is directed to the hydraulic cylinder, it moves the piston with a great deal of force. This pushes out on the metal struts. The valve plate extends outward, unplugging the water reservoir. The water drops directly underneath the reservoir, into a curved passageway leading to the pool. As it rushes into the pool, the water ramps up a sort of reef in the concrete floor. This focuses the flowing water so that it moves in a good-sized, surfable wave.

The water pumps do most of the work in building up a wave, but the hydraulic system is the crucial element that actually gets it going. In the next section, we'll look at the simple but ingenious mechanism that controls this system.

Out with the Old, In with the New

A wave pool, just like any swimming pool, is constantly losing water. Some of it evaporates into the air, some of it is filtered out and a good bit is carried away in swimmers' bathing suits (and on their bodies).

To keep the water level up in Thunder Bay, Emerald Pointe has to constantly pump in new water. The park is connected to the city water line, but most of the water comes from several underground wells. The wells pump water into the wave-pool canal as well as into other feeder pools in the park. Installing the water wells required a hefty initial investment, but it meant much lower monthly water bills in the long run. 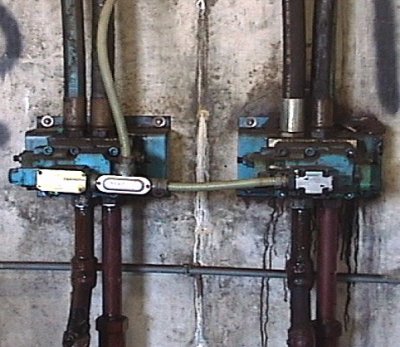 In the last section, we saw that the wave generator's valves are opened by hydraulic pistons. As with most any hydraulic machine, these pistons are powered by a basic hydraulic pump. The pump keeps a steady stream of pressurized oil flowing into the system. Emerald Pointe actually uses vegetable oil, rather than regular machine oil, since there is some risk of the oil leaking into the wave pool.

In the wave generator, the oil flow is controlled by a directional control valve. The valve is connected to several hoses, leading to:

If you were to cut open one of the piston cylinders, you would see something like this:

You can see that the piston rod that extends outside the cylinder is actually moved by a piston head inside the cylinder. There is fluid on both sides of this piston head, fed by two different hoses. If the force is greater on the blue side, the piston will move to the left, and if it is higher on the orange side, the piston will move to the right. To change the direction of force, you stop pumping oil to one side and start pumping it to the other. This sort of piston cylinder is commonly called a hydraulic ram.

The directional control valve directs the flow to these rams. It has a small spool that moves back and forth, blocking some inlet and outlet ports and opening others. In this animation, you can see the basic design of this sort of hydraulic system:

One of the most amazing things about this control system, and the wave generator in general, is how durable it is. All summer long, the Emerald Pointe crew starts the waves at the crack of dawn and doesn't shut the system down until the park closes in the evening. That's one tough work week!