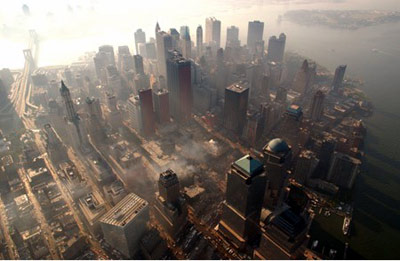 In the months following the attacks, the United States, and the world, had a lot of work to do. While most of us were doing a lot of emotional work, to make sense of what had happened, the more than 1,500 firemen, search and rescue teams, ironworkers, engineers, heavy equipment operators and other workers at ground zero were doing the very tangible physical work of cleaning up the World Trade Center wreckage.

The ground zero effort began as a search-and-rescue operation, with workers removing debris carefully, looking for voids where there might be survivors. In the first hours, rescue workers mainly employed bucket brigades, which allowed them to remove debris carefully and systematically. This was important not only for the safety of any survivors, but also for the workers themselves. The wreckage was a precarious mess of twisted steel, concrete and debris, which could shift at any time.

The crew also brought in heavy equipment, including excavators and cranes. Setting up the massive cranes was a real challenge, because the ground underneath wasn't entirely stable. When the towers and surrounding buildings collapsed, the falling steel punctured huge holes in the WTC plaza, filling large sections of the basement with debris. The rescue workers weren't just sifting through a pile of wreckage above ground; they were working on top of a pit filled with debris. Engineers had to find and secure stable ground for their 300-ton and 800-ton cranes.

Additionally, the ground zero crew had to address the underground bathtub's stability. The force of the collapse destroyed much of the underground support structure that held the bathtub walls in place, risking a massive underground collapse. To maintain the basement's relative stability, the clean-up engineers had to reconfigure the tieback system that originally held the walls in place until they could construct a permanent support structure. This involved drilling into the ground and running new tieback cables between the walls and surrounding bedrock.

The clean-up effort was slow going -- the crew had to proceed carefully, and they had to move a lot of debris, truckload by truckload, to a Staten Island landfill. When the clean-up was finished, in May 2002, the workers had moved 108,000 truckloads of debris -- around 1.8 million tons of material. But despite this massive undertaking and inherent slow speed, the crew finished the job ahead of schedule, and well under budget.

Excavators sort through the rubble at ground zero, a month after the attack.
Photo courtesy FEMA

When the clean-up was finished, Americans turned their attention to the future of the World Trade Center site, and the varied visions are a poignant manifestation of the nation's emotion. Americans wanted a memorial to honor the dead and mark the pivotal day in history. But at the same time, most of the country wanted to put up new office buildings and get people back to work at the WTC site.

The prevailing sentiment is clear: Most Americans want the site to reflect the gravity and sorrow of September 11, but they refuse to let the attacks crush the spirit that put up the towers in the first place. It's important to the nation, on a symbolic and practical level, that the American way of life goes on undeterred, that international trade prevails and that engineers and architects continue to dream big.