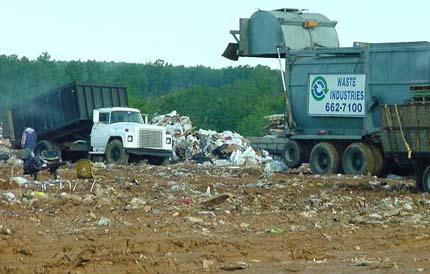 Private haulers drop off trash at a landfill. See more options for disposing of trash with pictures of green living.

­You­ have just finished your meal at a fast food restaurant and you throw your uneaten food, food wrappers, drink cup, utensils and napkins into the trash can. You don't think about that waste again. On trash pickup day in your neighborhood, you push your can out to the curb, and workers dump the contents into a big truck and haul it away. You don't have to think about that waste again, either. But maybe you have wondered, as you watch the trash truck pull away, just where that garbage ends up.

Americans generate trash at an astonishing rate of 4.6 pounds (2.1 kilograms) per day per person, which translates to 251 million tons (228 million metric tons) per year [source: EPA]. This is almost twice as much trash per person as most other major countries. What happens to this trash? Some gets recycled or recovered and some is burned, but the majority is buried in landfills. In this article, we will examine how a landfill is made, what happens to the trash in landfills, what problems are associated with a landfill and how these problems are solved.