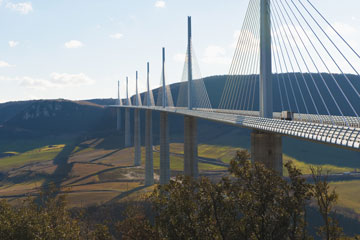 We are a species of bridge builders. Since time out of mind, humans have engineered structures to surmount obstacles, such as, say, Jiaozhou Bay. The body of water is now home to a 26.4-mile (42.5-kilometer) bridge that links the busy Chinese port city of Quingdao to the Chinese suburb of Huangdou.

We've tamed steel, stone, lumber and even living vegetation, all in an effort to reach the places, people and things we desire.

Although the concept itself is as simple as felling a tree across a creek, bridge design and construction entails serious ingenuity. Artists, architects and engineers pour vast resources into bridge construction and, in doing so, reshape the very environment in which we live.

As a result, we inhabit a planet of bridges, some as ancient as Greece's 3,000-year-old Arkadiko bridge or as unchanged as India's 500-year-old Meghalaya living bridges, which are coaxed into existence from growing tree roots (more on that later). Countless others have fallen into the ravines and rivers they span, as humans continue to tackle ever more ambitious bridges and construction.

In this article, we'll get to know the bridges we so often take for granted (we literally walk and drive all over them), as well as the designs that make them possible. We'll look at the fundamental principles of bridge engineering, the different types and how we attempt to thwart the physical forces and natural phenomena that perpetually threaten to destroy the world's bridges.

First up, let's get right down to the basics.