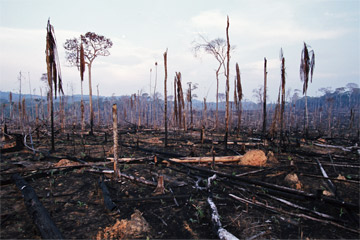 Slash and burn deforestation in the Amazon Basin circa June 2001. A decade later, Brazilian rates of deforestation have dropped sharply.
Marcus Lyon/Getty Images

The planet's amazing variety of life is more than just an academic curiosity; humans depend on it. For instance, farmers rely on worms, bacteria and other organisms to break down organic waste and keep soil rich in nitrogen, processes vital to modern agriculture. Pharmaceutical companies use a wide array of plants and animals to synthesize medications, and we can only guess how many medicinal breakthroughs reside in Earth's undiscovered species.

A stable food supply and a source for pharmaceuticals are only a couple of the benefits Earth's biodiversity provides. Earth's plant life mitigates the effect of global warming by absorbing carbon dioxide, yet 90 percent of those plants (and nearly two-thirds of all food crops) depend on the nearly 190,000 species of pollinating insects [sources: New York Times, U.S. Forest Service]. Scientists from Cornell even went so far as to add up the value of the different services Earth's plants and animals provide, and after factoring everything from ecotourism to biological pest control, they arrived at a grand total of $2.9 trillion -- and that was back in 1997 [source: Science Daily].

Clearly, the planet would be a much different place without its rich and diverse ecosystems, and while it's hard to imagine what that place would look like, we may not have to if we can't protect the planet from the looming threats to biodiversity. Climate change is increasingly forcing species away from their habitats in search of more favorable temperatures, and scientists fear not all species will survive the change. Overhunting, which famously led to the extinction of the passenger pigeon, continues to endanger animals like the rhino. Invasive species like kudzu and the brown tree snake, introduced by humans to non-native environments, can rapidly drive native species to extinction. In the United States, invasive species cause between $125 and $140 billion in damage every year, and they are thought to have played a part in nearly half of all extinctions worldwide since the 1600s [sources: Thomas, University of Michigan].

The greatest of all threats to Earth's biodiversity, however, is deforestation. While deforestation threatens ecosystems across the globe, it's particularly destructive to tropical rainforests. In terms of Earth's biodiversity, rainforests are hugely important; though they cover only 7 percent of the Earth, they house more than half the world's species [sources: NASA, University of Michigan]. Through logging, mining and farming, humans destroy approximately 2 percent of the Earth's rainforests every year, often damaging the soil so badly in the process that the forest has a difficult time recovering [source: University of Michigan]. As their habitats disappear, plants and animals are forced to compete with one another for the remaining space, and those that can't go extinct. In recent history, deforestation has led to approximately 36 percent of all extinctions, and as the habitat loss accelerates, that number is bound to increase [source: University of Michigan].

Deforestation is particularly difficult to stop because it has so many causes. While it's easy to blame irresponsible logging and mining companies for the devastation, their reckless practices are in some ways a symptom of larger problems. For instance, many rainforests are located in developing countries that lack the resources to enforce environmental regulations. These countries also benefit greatly from the economic activity that the companies generate, giving them even less incentive to discourage deforestation. What's more, the indigenous people who make their homes in the rainforests regularly clear the land to make room for plantations and cattle pastures, and efforts to stop this activity directly impair the livelihoods of those people.

Fortunately, hope remains for the Earth's rainforests. In Brazil, satellite imagery revealed that the rate of deforestation fell by 49 percent compared to the previous year, thanks in part to stricter environmental regulations and increased enforcement. Recent studies have also shown that as a country's economic conditions improve, its deforestation rate slows considerably as the indigenous populations rely less on the rainforest's resources for survival. Finally, nonprofit groups like the World Wildlife Fund and the Sierra Club continue to raise awareness about the importance of Earth's rainforests. One such nonprofit, the Nature Conservancy, has even started working with local Brazilian municipalities to help land owners register their plots of the rainforest, a practice that will help hold them accountable to Brazil's environmental regulations. The collective efforts of governments, nonprofits and the indigenous peoples may be enough stop the destruction before it's too late.

How the Salton Sea Became an Eco Wasteland
How the Sierra Club Works
What is civilization's impact on Earth's environment?