Who is Affected by Desertification? 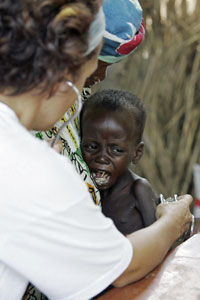 ­An overwhelming 90 percent of the people who live in dryland ecosystems -- those areas most prone to soil degradation and desertification -- are citizens of developing countries. This adds up to 2 billion people, mostly poor and marginalized, who are immediately affected by the deadly consequences of desertification [source: GreenFacts.org].

Experts estimate that more than 24,000 people die every day from starvation [source: The Hunger Site]. The worst sufferers are populations living in the dryland regions of sub-Saharan Africa and Central Asia. It's estimated than more than 70 percent of drylands in Africa, Asia and Latin America that are being used for agricultural purposes are already experiencing the effects of desertification [source: PeopleandPlanet.net]. The infant mortality rate in a dryland developing country is 10 times the rate of an industrialized nation [source: GreenFacts.org].

When experts talk about the causes and effects of desertification, they talk a lot about ecosystem services, the resources that an environment offers to its inhabitants. People living in marginal dryland regions depend much more heavily on their local ecosystem services than people in developing countries [source: GreenFacts.org].

In the United States, for example, much of the food we eat and fuel we use comes from other regions or even other countries. In a country like Burkina Faso in sub-Saharan Africa, everything comes from the immediate surrounding area. There is no money or infrastructure to import food and fuel. So when the local conditions worsen through soil degradation and desertification, the impact on the lives of the people is far more severe.

The only way to avoid starvation is to move to another area that hasn't been entirely degraded yet. This continuous mass migration of people into fragile regions speeds up the desertification process exponentially.

But the effects of desertification are also felt by millions of people living far from the immediate dryland zones. One effect is the mass migration of people from rural areas to already overpopulated cities. This contributes to sprawling slums that are breeding grounds for disease. It's estimated that 50 million people will be displaced by desertification in the next decade [source: PeopleandPlanet.net].

Dust storms from the Gobi desert in China create poor air conditions in Beijing, and the dust fallout from larger storms has been detected as far away as North America [source: NASA]. Dust storms have been proven to trigger allergic reactions and asthma attacks and have a particularly negative health impact on children and the elderly [source: NSW Department of Health].

The larger effects of desertification can be felt on a global level. Investigations into the cause of the global food crisis of 2008 point to desertification as one of its sources [source: UN News Centre]. Degradation of available farmland contributes to less food production and higher prices for staple crops like rice, wheat and corn. In March 2008, the price of wheat was up 130 percent from a year before and the price of soy was up 87 percent [source: BBC News]. For those countries that can't produce their own food due to soil degradation, they can no longer afford to import.

Now that we understand the scope of the desertification crisis, we'll explore what steps can be taken to stop and even reverse the deadly trend.