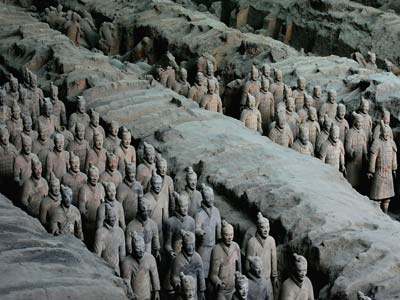 On the morning of March ­29, 1974, seven farmers set out to dig a well. It was the drou­ght season in the northwestern Chinese village of Xiyang, where the men toiled to break through the parched earth in search of water. When they had descended about 13 feet (4 meters) underground, the farmers struck something hard. But it wasn't root or rock. Much to their astonishment, they uncovered a decapitated head made of terracotta pottery. Baffled, they sifted through the surrounding earth. Lo and behold, it was littered with similar clay shards.

After alerting government officials of their bizarre findings, archaeologists were dispatched to the site. The experts knew that the farmers' land stood near the burial ground of Qin Shi Huangdi (pronounced cheen shhr huang dee), China's first emperor. Ancient historical texts described Qin's opulent mausoleum, embellished with mountains of gold and constellations made of pearls and precious gems. As they delved deeper into the initial dig site, the archaeologists quickly realized that the emperor's burial complex extended much farther than previously assumed.

That clay head the farmers found belonged to a statue of a Chinese warrior. But it wasn't some random statue, submerged alone in the ground. Emperor Qin had comm­issioned thousands of terracotta soldiers to guard his magnificent tomb.

For more than 2,200 years, an estimated 7,000 life-size terracotta generals, infantrymen, archers and cavalrymen flanked the eastern side of the mausoleum. An armory filled with intricate suits of armor constructed from limestone plates could protect them against whatever foe dared to enter the emperor's tomb. Their open hands gripped bronze swords, spears and crossbows, poised to attack at any moment.

The terracotta army constitutes only a fraction of the artifacts contained in Emperor Qin's mausoleum. More than 14 years following the discovery, archaeologists have excavated at a deliberately slow pace to protect the artifacts. Yet the more archaeologists find, the more they learn about this ancient Chinese culture and Emperor Qin's rule. Though the clay warriors stand silently, they have many tales to tell. 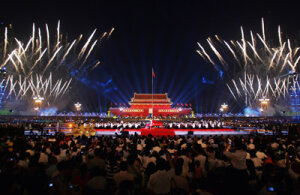 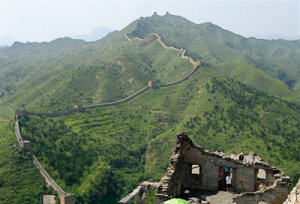 How the Great Wall of China Works