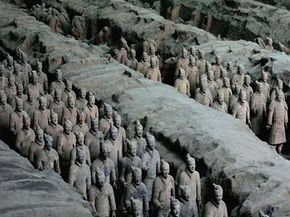 On the morning of March ­29, 1974, seven farmers set out to dig a well. It was the drou­ght season in the northwestern Chinese village of Xiyang, where the men toiled to break through the parched earth in search of water. When they had descended about 13 feet (4 meters) underground, the farmers struck something hard. But it wasn't root or rock. Much to their astonishment, they uncovered a decapitated head made of terracotta pottery. Baffled, they sifted through the surrounding earth. Lo and behold, it was littered with similar clay shards.

After alerting government officials of their bizarre findings, archaeologists were dispatched to the site. The experts knew that the farmers' land stood near the burial ground of Qin Shi Huangdi (pronounced cheen shhr huang dee), China's first emperor. Ancient historical texts described Qin's opulent mausoleum, embellished with mountains of gold and constellations made of pearls and precious gems. As they delved deeper into the initial dig site, the archaeologists quickly realized that the emperor's burial complex extended much farther than previously assumed.

That clay head the farmers found belonged to a statue of a Chinese warrior. But it wasn't some random statue, submerged alone in the ground. Emperor Qin had comm­issioned thousands of terracotta soldiers to guard his magnificent tomb.

For more than 2,200 years, an estimated 7,000 life-size terracotta generals, infantrymen, archers and cavalrymen flanked the eastern side of the mausoleum. An armory filled with intricate suits of armor constructed from limestone plates could protect them against whatever foe dared to enter the emperor's tomb. Their open hands gripped bronze swords, spears and crossbows, poised to attack at any moment.

The terracotta army constitutes only a fraction of the artifacts contained in Emperor Qin's mausoleum. More than 14 years following the discovery, archaeologists have excavated at a deliberately slow pace to protect the artifacts. Yet the more archaeologists find, the more they learn about this ancient Chinese culture and Emperor Qin's rule. Though the clay warriors stand silently, they have many tales to tell.

Befor­e the Qin dynasty began in 221 B.C.­, the area that would become modern-day China was composed of seven major kingdoms. In 481 B.C., the leaders of the various kingdoms began jostling for greater authority, ushering in an era called the Warring States.

Qin Shi Huangdi (then known as Ying Zheng) positioned the Qin state to overtake the others by flexing its military muscle. He built up his army through conscriptio­n, or forced enrollment, and divided it into specialized units, which was a strategic innovation for that time [source: High Museum]. The military also utilized horses for the cavalry and perfected the crossbow, which allowed them to obliterate enemies. After achieving his goal of conquest, Emperor Qin set out to consolidate his power over these disparate lands.

­To build his new empire, Qin needed money. But the six former states each traded with different forms of currency, such as squat, bladelike knife money in the northeast and the long, thin spade money in the central states. To remedy this, Emperor Qin introduced the banliangcoin shaped like a tiny square donut. In ancient Chinese culture, the square symbolized the Earth and the circle represented the sky, which reveals Qin's high regard for the vastness of his empire. Emperor Qin also systemized weights and measurements along with the written language.

These standards unified the empire and also enabled the legalistic ruler to tax his citizens and enforce strict labor laws. With a mix of tyranny and brilliance, Qin organized the population into units of five to 10 families. Since the unit's well-being depended on everyone's obedience to laws, it ensured cooperation. Moreover, hundreds of thousands of Qin's subjects had no choice but to toil -- and sometimes die -- constructing the roads and canals the emperor desired. This citizen workforce also built the first Great Wall in China to protect Qin's empire from northern enemies.

Of course, not everyone readily succumbed to Emperor Qin's iron fist. He escaped three assassination attempts, which bred his intense fear of death. Above all, Qin yearned for immortality. He sent out convoys in search of a mythical island of everlasting youth and reportedly commissioned alchemists to concoct pills and potions to sustain his life [source: High Museum]. In case those tactics failed, Emperor Qin enlisted his subjects to build a dazzling burial complex with an impenetrable army to protect him in the afterlife.

An Army Fit for an Emperor 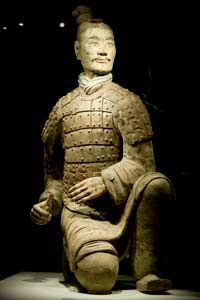 A bowman from the terracotta army.
Tim Graham/Getty Images

On­ the front lines of the terracotta army, bowmen kneel with those formidable Qin crossbows at the ready. These archers wear armor of interlocking leather squares and rest their thumbs on their weapon's trigger. Their hair is tied tightly into a topknot that perches slightly askew on the crown of their heads. Even the soles of their shoes display fine tread marks.

Modeling the army required 1,000-person assembly lines [source: High Museum]. Including their bases, the completed figures stand between 6 and 6.5 feet (1.8 and 2 meters). The construction process began with the laborers pounding out the bases for these terracotta Goliaths. Then, they affixed legs, made from uniform clay molds, onto the foundation. Arms, torsos, hands and heads also were mass-produced, although artisans used variously sized molds for different statues to lend variety and realism to the pottery army.

Archaeologists have identified at least eight unique head molds that reflect the ethnic diversity of the Qin empire that still exists in China [source: High Museum]. Before transporting the clay warriors to the kiln to bake them, the craftsman sculpted individual features by hand. Some warriors bear a serene facial expression, while others display a fiercer countenance with distinctive eyes, noses and cheekbones. Even hair and headdress received careful attention. Higher-ranked soldiers boast more elaborate caps and coiffures. Civil servants and armed infantrymen wear simple beanies, for instance, while generals sport pheasant-tail hats that tie beneath their chins in floppy bows. Men grew their hair long in ancient Chinese culture, and larger topknots or buns indicate more kills on the battlefield.

The ancient Chinese laborers didn't stop short of ornamenting the warriors in vivid color. After being fired in the kiln, the figures received coatings of lacquer and pigments of purples, greens and reds mixed with egg. Unfortunately, the lacquer's chemical composition reacted negatively to humidity. Once archeologists extracted the statues from the soil, the paint peeled away, which accounts for the warriors' reddish-gray hue similar to unpainted flower pots [source: Hessler]. Nevertheless, the statues still showcase painstaking detail previously unseen in Chinese sculpture.

Each warrior also bears a small stamp of the assembly line foreman's name. That way, any flaws could be traced back to the person responsible. Such meticulous accountability underscores Qin's obsession with his burial complex mimicking reality as accurately as possible.

Significance of the Terracotta Army

An inscription Emperor Qin commissioned on the side of Mount Yi in eastern China described him as "the August and Divine Emperor [who] has unified all under one lineage [source: High Museum]." While Qin reveled in his imperial might, he also had good reason to obsess over death. Thousands had perished in the brutal wars to expand his empire, and he dreaded getting his just desserts in the afterlife [source: High Museum]. This explains why the terracotta army is stationed on the eastern side of his tomb. Qin, who hailed from the west, overthrew the kingdoms in the east; the army would block any of those revenge seekers.

By the time of the Qin dynasty, the question of life after death had been discredited by notable philosophers, such as Confucius, but it was still common to bury someone with a symbolic token from his or her life [source: Berger]. For Qin, that token was a scale model replica of his domain. Fancying himself as the ruler of the cosmos, he certainly didn't wish for death to draw the final curtain on his reign.

In perfecting a burial complex that rivals the size of Manhattan, Qin didn't stop at his 7,000-strong army. According to "Records of the Historian" by Han dynasty historian Sima Qian, laborers booby-trapped the room containing Qin's tomb with crossbows. Inside, the historian claimed that mountains chiseled from gold and constellations of pearls embellished the chamber. The text also mentions rivers of mercury, and tests have verified abnormally high mercury levels in the ground above the burial site [source: Hoh].

Out of the 600 pits archaeologists have unearthed across the complex, one relic in particular marks a milestone in Chinese art history. Separated from the terracotta army, a group of 11 acrobats and entertainers sharply contrast the design of the soldiers in their level of anatomical detail. The craftsmen sculpted a strongman with visible biceps and muscle striations in his back. Remarkably, that figure is the earliest example in China of human sculpture with that degree of realism [source: Hessler].

Indeed, Emperor Qin set a high bar for other dynastic rulers' tombs. Some made impressive efforts, but none came close to matching the magnitude of the first emperor's complex.

How China Got Its Name

The name Qin is pronounced "cheen". Historians think that China derived its own name from the first Qin dynasty.

­Despite his desperate quest for immortality, Emperor Qin died in 210 B.C. His dynasty didn't last much longer following his burial, and the Han dynasty claimed power in 206 B.C. During that interim, historians think that vandals looted Qin's precious burial complex, due to evidence of fire in some of the excavation pits and the terracotta warriors found knocked over and broken in pieces.

Another royal tomb was discovered 25 miles (40 kilometers) from Qin's mausoleum in 1990. Emperor Han Ling Di, who took the throne 53 years after Qin, also commissioned a veritable terracotta city for his afterlife. In addition to pottery soldiers, women and eunuchs, the funerary relics also included hundreds of dogs, sheep and pigs in a pit identified as the royal kitchen [source: Hessler]. While the Han tomb doesn't match the scope of Qin's, its terracotta figures signify a distinct difference between the two dynasties. Han Ling Di's are about one-third the height of Qin's mannequin-sized statues. Historians explain this discrepancy as a reflection of the Han dynasty's more equitable ruling style. Consider, for instance, that Han Ling Di adhered to the motto "Do nothing in order to govern," and severely cut taxes and halted forced labor programs [source: Hessler].

South of Beijing in the Shandong province, yet another terracotta army turned up in 2002. Referred to as the Weishan site, it's either the grave of a Han emperor or royal family member. It contains hundreds of foot-tall terracotta soldiers, horses and chariots aligned in a specific military formation with cavalrymen leading the front [source: Wilford]. Experts have cited the Weishan army as the first evidence for Han battle formation, but it also could be an honor guard configuration [source: Lobell]. Though the Weishan site covers approximately 10,000 square feet (929 square meters), the diminutive statue size once again points to the Han dynasty's more benevolent hand.

With nearly 30 royal graves from the Han and Tang dynasties dotting the fields around the Emperor Qin's mausoleum, Chinese archeologists have decades of digging ahead of them. The Chinese government monitors the grounds above the fabled gold mountains and rivers of mercury within Qin's tomb chamber. As archeologists plow onward, countless tourists file through the ancient village for a glimpse at one of the most compelling relics of history. Though 7,000 terracotta warriors couldn't keep the prying masses away, Emperor Qin would be undoubtedly pleased that his legacy has endured so long. 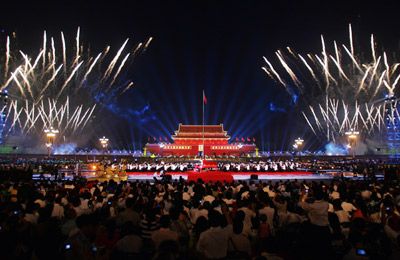 Up Next
How Beijing Works
Explore More 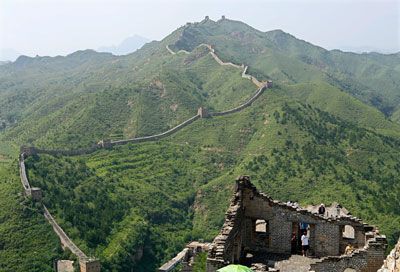