An Army Fit for an Emperor 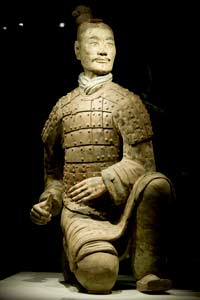 A bowman from the terracotta army.
Tim Graham/Getty Images

On­ the front lines of the terracotta army, bowmen kneel with those formidable Qin crossbows at the ready. These archers wear armor of interlocking leather squares and rest their thumbs on their weapon's trigger. Their hair is tied tightly into a topknot that perches slightly askew on the crown of their heads. Even the soles of their shoes display fine tread marks.

Modeling the army required 1,000-person assembly lines [source: High Museum]. Including their bases, the completed figures stand between 6 and 6.5 feet (1.8 and 2 meters). The construction process began with the laborers pounding out the bases for these terracotta Goliaths. Then, they affixed legs, made from uniform clay molds, onto the foundation. Arms, torsos, hands and heads also were mass-produced, although artisans used variously sized molds for different statues to lend variety and realism to the pottery army.

Archaeologists have identified at least eight unique head molds that reflect the ethnic diversity of the Qin empire that still exists in China [source: High Museum]. Before transporting the clay warriors to the kiln to bake them, the craftsman sculpted individual features by hand. Some warriors bear a serene facial expression, while others display a fiercer countenance with distinctive eyes, noses and cheekbones. Even hair and headdress received careful attention. Higher-ranked soldiers boast more elaborate caps and coiffures. Civil servants and armed infantrymen wear simple beanies, for instance, while generals sport pheasant-tail hats that tie beneath their chins in floppy bows. Men grew their hair long in ancient Chinese culture, and larger topknots or buns indicate more kills on the battlefield.

The ancient Chinese laborers didn't stop short of ornamenting the warriors in vivid color. After being fired in the kiln, the figures received coatings of lacquer and pigments of purples, greens and reds mixed with egg. Unfortunately, the lacquer's chemical composition reacted negatively to humidity. Once archeologists extracted the statues from the soil, the paint peeled away, which accounts for the warriors' reddish-gray hue similar to unpainted flower pots [source: Hessler]. Nevertheless, the statues still showcase painstaking detail previously unseen in Chinese sculpture.

Each warrior also bears a small stamp of the assembly line foreman's name. That way, any flaws could be traced back to the person responsible. Such meticulous accountability underscores Qin's obsession with his burial complex mimicking reality as accurately as possible.